Wales High School by J. Peters is the second book in the ‘Wales School’ series featuring the school life of a popular lead character Jacques. Those who have read Wales Middle School will find this book smooth and interconnected. The story picks up where it was left during the middle school years. The year is 2000 and Jacques is no more the president of student council – he is starting fresh as a High School student. Whatever happened in the middle school, Jacques is least bothered about that. During that time, he rose and fell. But this time, once again he bows to be as promising as he was in the middle years. 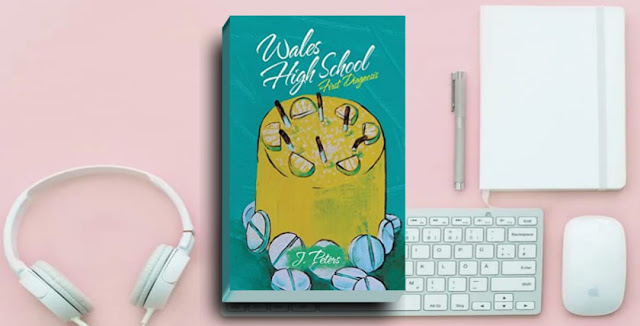 Like the previous book, this too starts with short chapters that portray a gamut of school experience of Jacques. For instance, initially Jacques excels in biology class but he longs for honors in Chemistry, and his participation in debates, grabbing two trophies bring him sarcastic remarks and hate from his fellow mates.

Even in high school years, Jacques seems enjoying his life as he was doing earlier. However, this time, he gets into unbridled teenage madness. At the façade, his school classes and participation runs but in the backdrop he is getting into something untoward owing to jealousy with friends and other reasons.

Evens like the death of his aunt, research for Dementia, English teacher accusing of stealing a book, caught smoking by his mother, acquaintance with Davis Mavis, free bus trips, etc. begins causing him lose his mental stability. Amidst all, when he fakes of diagnosed with deadly diseases and fails to get into the good books of Davis Mavis, he turns irritated, he loses his calm, becomes a stalker and a layer of depression pulls him downward. A few complaints and his journey to the hospital begins much to his shock. He was doing many things for a fake pretense or maybe to have some fun…but it wasn’t a good idea. His behavior turns bizarre and impatient and he injures himself by cutting his wrist.

School time is as fun as formative, if one fails to behave and mange properly, the ramifications could be perilous. Much of the events seem spiraling from the author’s school life, yet he managed to pass on a very important message for the society: teenage madness needs to be curtailed by love and parental vigilance.

J. Peters usually writes about school and college life experiences through his much debated character Jacques. Readers may at times sympathize with Jacques and sometime may loathe him for his trouble seeking habits.

J. Peters wring is captivating, and language usage is highly lucid and easy to follow up with not so many characters. People who love books about teenage life and school and early college life will definitely have treat in Peters writing.