Wales Middle School by J. Peters is a fascinating teen & young novel about the protagonist Jacques. The novel runs up to 60 pages with very short chapters – it covers the school journey of one boy who rises from being simple to the president of school council. The novel aptly deals with preteen and preadolescent days of a growing school boy. 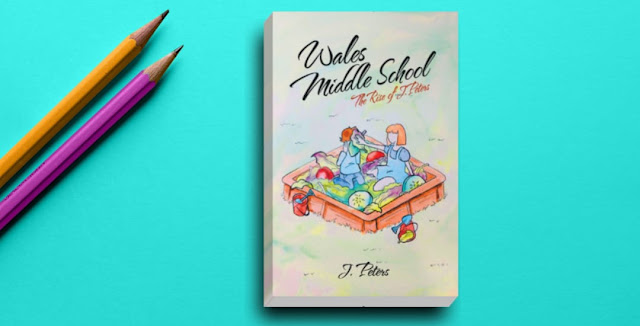 The timeline of the story runs between 1996 to 1999. During this time Jacques attends the middle school. The novel captures his journey in an order of events. In the start, we see how he is a gentle-mannered good school boy, but deep inside him runs a ruthless urge to play with the powers he possibly could get at this malleable phase of life.

The novel starts with regular school events happening in Jacques life such as school bus number 17, his friendship with Alec and Brian, playing prank calls, food rotting in the locker, and so on. As the story chugs ahead, we see the other side of a simple-looking school boy…that is more of his hidden human side. He begins snubbing and victimizing other students in the bus and school premises. By doing all that, he feels a satisfactory win within him. His lust for power becomes evident when he contests president elections and wins it easily.

However, in his presidential stance he faces criticism from many of the students, including his close friends. Another notable misdeed about the boy is getting attracted by Hitler. In a Jewish town appreciating and being influenced by Hitler is something that people cannot take easily. As a result, he begins loosing what he all gathered during his middle school years. Collectively, the author portrays the inside and out of a school boy who tries everything to remain in high in social and academics and other matters…but it wasn’t that easy as Jacques thought.

It is a novella, without giving much we can say that the book is highly entertaining yet light to read. Absolutely a brilliant piece of literature back dropped against the middle years of school. This book is first in the School series, next is Wales High School. Fingers crossed – will Jacques be a fair guy in high school tenure.