A Pleasant Escape by Piyush Rohankar is a riveting novel with some interesting themes like romance, infatuation at young age, horror, contemporary social issues, and above all struggle of one IAS aspirant. This is a story of Alok Shirke, he is from Maharashtra. He already has, to his belt, B.Tech and MBA…but something is still missing. Thus, at parents’ behest and due to social pressure of securing a certain career in any field, his life brings him to Rajendra Nagar, in Delhi. But little did he know that something clumsy and intriguing awaits him. Like many obedient students, at first, he begins his preparations diligently. He acquaints with students like Gaurav, Manish, Sarah, Ankit and Sakshi, and a few more. The story has been told in flashback manner but you will not be able to distinguish until you reach the unexpected end. 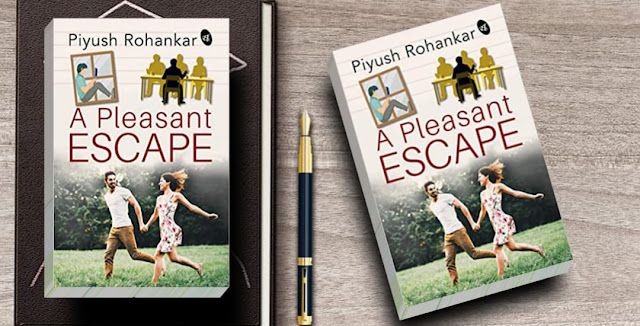 The main characters of the novel are young, representing the student crowd of India. They have their set of ambitions and challenges. The author keeps the story routing from one point to another and make us understand as how tough and depressive life can be for someone preparing the most-competitive exams like IAS. The story is set when a lot was happening in India and abroad. The author covered the Ana Hazare’s Lokpal Bill movement through a meek character named Manish and later on Alok strives ahead to save Manish’s sister from brothel. Then, in the next stance he covered the miserable life of Kurds in Turkey. The story seems careers off the main track but after one point of time it converges to a final ending. The author portrayed with full pragmatism as how students prepare for exams, and what are the motives behind taking IAS as one of the careers in life. Ironically, not all stories succeed in getting into IAS services.

Talking about love and relationship, the protagonist sheds light on two love stories. First, his love affair with a Muslim girl named Sarah, and secondly, there is Ankit and Sakshi. Through these love stories, the author conveyed the message that still marriages are made based on caste, creed, and religion. Why did author focus more on Ankit and Sakshi’s love story? The answer lies at the end – their story is something called ‘unexpected twist’ in the story.

Overall, the story is good because of paranormal angle. It was unexpected. Other than student preparation psychology, Piyush also covered the nation’s changing mood with movements like Lokpal bill and arrival of Narendra Modi in the centre politics. This novel cannot be labeled as just one student’s story or a causal romance, rather it blends many subplots into one to form one intense yet entertaining read. One should be reading this novel to know the fate stories of many preparing for IAS exams, including Alok Shirke.

Narration is lucid. There are quite a characters and subplots but the story moves at measured pace. There are bounty of romance that Shrishti Publishers release every month, but this one is different, rather a heady mix of ambitions, love, lust, ghost stories, and setbacks. Since the author Piyush is an Indian Civil Servant, possibly he could have come across some of the anecdotes mentioned in the story. A Pleasant Escape is indeed a pleasant read.