Book Review: It Just Required One Step by Saif Israr 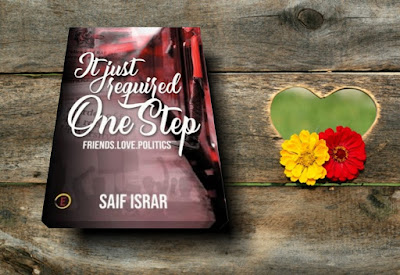 North India is famous for political brawls and it’s the same region that decides the overall politics of the country. So, by choosing Uttar Pradesh as the backdrop of the novel, the author has done the right thing. It couldn’t be riveting at any place. Though the novel is not entirely based on politics, but still it runs like banter throughout the story line. On the façade, love, betrayal, redemption, and friendship are some crucial themes that never leave the characters and their idiosyncrasies.

In the story, we see that a boy from a middle class family goes to Allahabad to study a law degree. The boy we are talking about is Samar – one of the lead protagonists in the novel. Why did he leave his family back in Lucknow to study law at Hastings University in Allahabad? May be…he wants to explore the world at his own or something else? Whatever is the reason, you can find once you pick up the novel.

Once in the college, the entire novel’s narration is being built around its allied events. In the hostel, Samar lives with Girish, one of his rich friends, and Anubhav, the vice president of Hastings University Students Union (HUSU). Anubhav is powerful and filthy rich, he hails from a political background. So, do you think that Samar has been placed in good hands, with rich and powerful friends; will his life be easy in HU? Fingers crossed…

On the love façade, we see that Samar stumbles upon a ravishing beauty called Nupur. The kind of encounters they go through before getting into a bond of friendship and later in presumably love are somewhat spicy and have that Bollywood feel.

On the one side, Samar’s closeness to Nupur makes him believe that he is set for a salt-of-the-earth love story. However, on the other hand, Girish and Anubhav’s decadence threatens to annihilate his moral values and latent dignity. What next? Surely, conflict of interests. Samar has been depicted a bit uncomfortable and introvert character that causes a lot of turbulence in the storyline. But, whatever events he gets through sounds right at that age. At that young age, some of the things are inevitable and the author has been right in showing the contemporary colours of the life of today’s students in India.

In a sense, the lead character Samar is not perfect. He too has had many flaws and struggles in his peculiar stances as per his tenacity and caliber. When he finds himself unable to cope up with declining morality of Girish and Anubhav, he finds some solace in the company of Arun, a silent and serious personality.

Samar and Arun get into protests against the university administration and other brutal things that often happen in the university. Their protests first become the talk of the town and then nationwide; subsequently, Arun becomes the president of the HUSU, and Samar gets good fame. Here onwards, the face of the novel changes drastically and we witness more drama and adventure and nostalgia. Amid all hue and cries, Samar keeps striving to get the love of Nupur, but his dream shattered when he comes to that that Nupur is already in love with Anubhav. Samar feels helpless! Will he get the love of his life? What incidents await him that can shape his entire life? Will he emerge as a winner in the end or may get lost in the ocean of anonymity? To know all that you need to pick up the novel, there is more than the just story of some students.

Behind the wheel lies the aspects that steer the ship of one’s destiny. One cannot get over it simply. Highly overwhelming! Great novel for this age! With a terrific narration and juncture of climaxes, Samar has nailed it. It’s time you try someone like Saif Israr.

Next Romance Read: She Stood by Me