April 09, 2020
At times we come across a book or novel that we find easy to read and experience it in best spirits but if you are told to narrate or pass it on to others, you may find it hard to do that. Those sorts of novels and books are not easy to pen down, remember D.H. Lawrence’s Sons and Lovers – what a class it had. It had everything: romance, action, subplots and the best descriptions of English miners lives but covered quite subtly. In a way that one can savour as much as possible but cannot retold it. Yes…those novels are indeed worth praise and require a level of understanding to sail through. One such novel today is Peppered Minds by Om Somani. 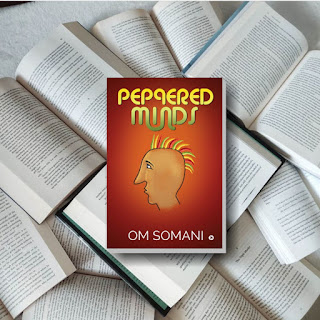 It’s a wonderful book featuring a journey of a young man named Neeraj in his professional stance. The book is way descriptive with its characters and other settings, for instance when it commences the story is about a postman striving hard to introduce us to the lead character Neeraj. At his home, we got to meet his sister and parents and a few other auxiliary characters. The author has described the middle-class and conservative family with an excellent affinity. Almost all the scenes were highly relatable and the kind of thought process gallops in each characters mind is simply superb. One thing is clear that the author must have done a lot of thinking before shaping up even a minuscule character or setting.

At the façade of the story, we see that Neeraj who lives in Jaipur with his family gets a job in a government company that explores raw material like uranium for nuclear plants. He has been selected as geologist. The author has considerably given much coverage to his pre-departure activities and when he boards the train, he is set out for a different journey in life altogether. It’s highly a likeable point to note down that the author has given less coverage to love brouhaha but still the breeze of love is constant throughout the novel. Neeraj is such a charming and decent guy that at the office and everywhere girls get attracted to him automatically or much to the fact that he is young and successful as a civil worker.

The story has been narrated via a few voices; there has been a preface to every character or situation. At times it seemed that the story is dragged unnecessarily but it has been done with such hilarity that you would love to delve deeper for more fun and mirth. The book is a top-class example of a literature filled with wit and humour. Characters like Raju, Prashant and his wife are simply awesome. They stood matchless. The episode of Prashant booking tickets and further taking a flight to Andaman’s and his wife’s experience in the flight was sure to make you fall of the davenport. Humorous tone is one such strong aspect of the novel but underneath runs a quest to find out as why Indians aren’t innovative at their work, hence fellow countrymen do not see good days.

The ending of the novel is totally unexpected…readers will get the taste of life. All of sudden the book gives a feel of thrill and probably one would doubt the consumption of chili or extra spices in the Indian food. Is the chili responsible for the blockage of creative to humans? Maybe…find out yourself.