March 23, 2020
Long Live the Sullied by Gaurav Sharma is as good and as promising as the first book ‘God of the Sullied’. These two books make up the complete ‘The Sullied Warrior Duology’. Those who have read the first book now can’t wait to pick up the second one. And those who have picked up ‘Long Live the Sullied’ by chance need to go back and read ‘God of the Sullied’, as both books are inseparable. In both the novels, characters are almost same – however their action and priorities differ from one time to another. Pundir is at the forefront of this novel, though the story never forgets Eklavya, he remains in the backdrop like banter. 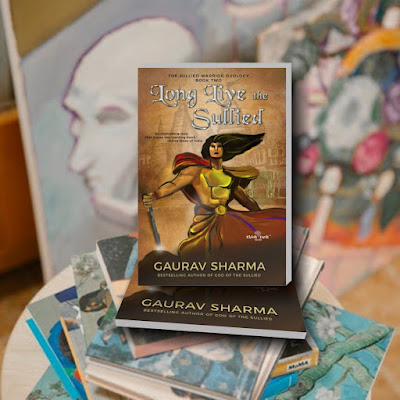 Just like the first book, this one too has been narrated by a multiple voices. This time much focus has been given to Mahapurohit and Pundir and a few teachers of Gurukul, where Eklavya and Pundir studied together. After the basic tenure of three years, Eklavya returns his home and never returns to the mountain Gurukul. But Pundir returns thinking Eklavya would be there for company and everything. But what all happened to Eklavya when he goes back to his home and village after gaining combat skills and theology class for three years at Gurukul? Why didn’t he come back? Did he think three years education was enough or there was something else? All the answers lie in the first book.

The second part is about Eklavya’s return to his kingdom and Pundir stirring for some action. The novel kicks off with Acharya Virbhadra searching for his favourite student Eklavya. Little did he know that Eklavya had been a king of Rudraputra after leaving the gurukul? Will Acharya Virbhadra be able to meet Eklavya? That’s another mystery here.

In both the books, hill bandits acted as antagonists, they looted and killed people. Their actions have always added thrill and adventure in the story but at the same time put Eklavya and Pundir in a strange dilemma. This time it’s Pundir who succumbed to their misery. Pundir’s one of the objectives in life was to fight the hill bandits as they most of the time plundered and killed his village folks. He went to Gurukul to learn excellent combat skills so that he could fight against those bandits, but fate had some different plans for him.

Find out what happens when Pundir plans to approach the king of Rudraputra whom he blames for the loss incurred by the hill bandits. Will Pundir be able to meet his best childhood friend Eklavya? The story is a bit fragmented, but the way it converges to a single point makes up for all the pitfalls. Written in simple and superb manner, this is one of the best sequels to any mythological fiction you would have ever read in life. The Sullied Warrior Duology becomes a mandatory read for mythological lovers…it’s rather a treat.

Next Read: God of the Sullied