Book Review: God of the Sullied by Gaurav Sharma

March 21, 2020
God of the Sullied by Gaurav Sharma is a different, yet riveting, mythological fiction. This is the first book in the series of The Sullied Warrior Duology. The second book in the series is ‘Long Live the Sullied’. Both books are extremely connected by sharing almost the same settings, backdrop, set of characters – however circumstances are different. 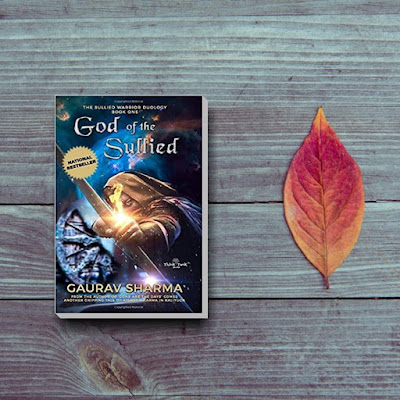 In this novel God of the Sullied, Eklavya is the protagonist. The story revolves around his birth and his destiny which takes him up to the throne of an Indian state called Rudraputra, though a fictional town. In broader outlook, the story is more of a journey of a cursed boy till he becomes the king of Rudraputra who fights the devil of Kali Yuga.

The novel is set in 9th century India, probably a time when it’s predicted that the spread of Kali was going to sweep the entire world under its influence. From Satyuga to Kalyuga, the change was evident throughout the story. The novel houses a peculiar set of characters, they differ from one to another by various aspects, but feel connected and criss-cross each other at some point of time. The novel has been narrated using multiple voices, sometime as incredible as ‘Time’. At times the story is fragmented, but most of the time it chugs ahead quite fast-paced.

Sullied means cursed. The inner setting of the novel depicts that a boy will be born to dispel the darkness spread by Kali, the Yuga. Look at the idiosyncrasies of the story – Vyas and Sumati were counted among good people. They were helpful towards all. But there was one eunuch who learns astrology and his fame grows manifold in short time. He feared the fame of Vyas, thus, he plans to ruin him. How? That makes up the rest of the story and it also shapes the ups and downs of Eklavya’s life. In fact, his journey after graduating from a top-notched Gurukul is really fascinating. He had no one whom he could call his own kin, he was rendered orphaned, out-casted, ignored, reckoned cursed and much more. The darkness from within and the outside world totally engulf him. He was about to plunge into the river Ganga for suicide, but he was interrupted by an enigmatic soul. Much is changed thereafter and vagaries of life take up a new route for him.

Unlike other famous mythological fictional books by Indian authors, this one is different, as it didn’t involve familiar people and demigod figures from the time of Ramayana and Mahabharata. Yes, the lead character Eklavya, at first sounded like a character from Mahabharata, but a close look reveals he is not that one. He is rather a scion of an Ikshvaku dynasty. So, the author has indeed weaved a tale that is not familiar at all. The fun and thrill in this book is unstoppable and you would be nudged to read the second part as soon as you could grab it.

The novel is not so full of action, but all time, it feels like moving at a good pace. Eklavya’s struggle and acquaintance and flawed character fuels life in the story. Also, the Hill Bandits climax is simply superb and the character of Maha Purohit is something beyond a human vista. The novel sounds so unique that at times if feels that the novel is quite light to read and grasp. It’s a good novel any time. But at its core essence it’s a tale that needs to be savoured by historical and mythological readers in high spirits.

Next Read: Long Live the Sullied