Book Review: Reminisce of the Lost Land by Subodh Sharma

February 25, 2020
As exquisite as powerful, the novella ‘Reminisce of the Lost Land’ takes us down to the memory lane. The book is authoritative and aesthetic in its essence and semblance, so much so that it can stir moments of nostalgia even in the stone-hearted people. With two French ladies at the forefront, the main story revolves around the ancestral history and heritage of the royal family of Bhangasura. 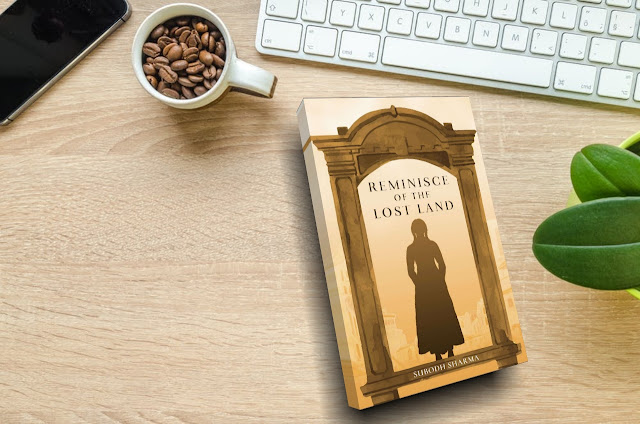 As the novel chugs ahead, we see that the feeling of ‘being in lost days’ is rudimentary to tribulations and privations in life. A young French lady arrives in Bhangasura in 1990 only to revive the days of her late mother Louise who was emotionally connected to this place. In the form of a video cassette and a manuscript, connected stories make way for a riveting narration which is not only rich in language selection but also vivid and opulent while exploring the ambience of the place, fort, people and their backs stories, and much more.

If you get into the stories of people, the prominent ones that run in the banter are of Diwan and the French lady Louise. It was Louise who first came to Bhangasura, as she wanted to make documentary film on the fort and its royal people, which was hidden to the Western Civilization. She gets acquainted with Maharaja, Maharani, Diwan and some other auxiliary characters. The world outside India was not so properly informed about the rich culture and heritage of the royal families that majorly existed before the independence. So, when Louise works for their cause – a lot has been passed on to the outer world.

As the mini stories begin unfold, the true value of the literature and the author’s brilliance touches up the hearts of the readers. Whatever stories are being told or written in the manuscript are somehow connected to Diwan and the kingdom of Bhangasura. The story of Nagaraja and Esther are fantastic in their stances, you would be thrilled to find as how they were connected to the current generation of Diwan.

Later on, the author gets close to four children of Diwan – Vivasat, Anshik, Roop, and Sadul. Their stories are mesmerizing – why they were living separately for years, with no communication and all. Their hearts are in pain owing to separation from their loved ones and more than that the charm and innocence of lost days is bothering them like anything, for instance, this sums it up perfectly:

“Jamal, I know you both will meet again. There is nothing wrong in it. He is my childhood friend, and more important and precious to me than money. He is very reserved, silent, but painful within. He is living away from his family, and the biggest pain is that none of them have visited him, nor invited him to Bhangasura. The worst of all is the news of Anshik Kumari getting married to an ordinary, middle-class boy working in the railways, has upset him the most…”

By visiting each one’s share of story, the novella in its all senses fully tries to explores the lost days of innocence and charm, often of adolescent and childhood. It’s to be understood that Diwan kept his state and family together by hook or crook – but after him all begin to disintegrate – that is the peculiar characteristic of time as it failed to understand the gap among the new generations’ hearts. Well, it has own reason.

Psychologically, the book holds a special place, though its story is fragmented but it makes up a riveting read for all that specially love sweeps and back stories and the exquisite history of the lost days. The story of other characters like Kevadia, Sunki, and Manji is by no means takes backseat – rather all stories are connected and powerful and have that degree of authority to influence the thought process. Part history, part fiction, this novella is of great importance to cherish the gold from their early days. With time and vagaries of fate, life is bound to change and it is depicted perfectly through this novella. Subodh as a writer has an awesome sense of aesthetics and the surrounding gripping the characters. Highly recommended!