January 07, 2015
Starry Nights, the second novel of Shobha De, is said be based on real-time Bollywood affairs. Hence the book is also being referred as ‘Bollywood Nights’. The novel was a good success in early 1990’s. As an upshot, it cemented Shobha De’s position in the Indian literature arena as a bold novelist. She is often referred as a bold novelist because she features female characters in her books and sex is something inseparable. The novel was in the limelight because of its Bollywood-oriented theme. This book, some say, has done considerably damage to the reputation of Bollywood stars, for instance, Amitabh Bachan and Rekha and some more star affairs. 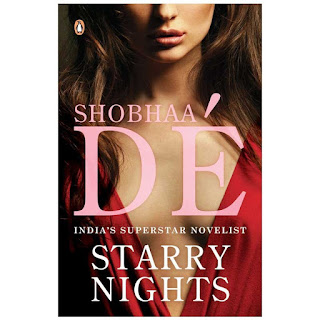 Shobha De's books are like spicy movies, so does this book. First time readers may find it gripping otherwise it is a warts-and-all. If reintroduced in this gadget-filled era, this book could cross its already set peaks, commercially as well as emotionally. The rise and fall of a Bollywood star is a good thing about this book, and revelations of the inside stories about Bollywood industry are amazingly researched and brought forward honestly.

Before pursuing a career into writing, Shobha De was a top model so she knows better what cooks best in the industry. Starry Nights is a spiced-up, racy novel. Other than the feminism approach, De has superbly explored the meaning of marriage in high societies. Akshay Arora chooses Aasha Rani for perfect bed chemistry over her wife, Malini, since he knows he cannot do whatever he does with Aasha Rani. When Malini approaches her and accuses of her for emotionally abducting her husband, Aasha Rani coolly replies that she – Malini – is full of hatred, possibly one reason that keeps her husband away from her.

The book provides useful insight as how women and their relationships work in the high societies and what options they seek to remain in the relationship, and how to keep alive their physical desires.