December 21, 2019
Anita by Renuka Guru is a contemporary fiction with a cross-cultural narrative and with philosophical heaviness. The novel has contemporized the shuttling between two cultures. No one can have a life devoid of cultures, no matter how transgressive is one, in the end everyone needs a semblance of culture to lead somewhat a purposeful and peaceful life. 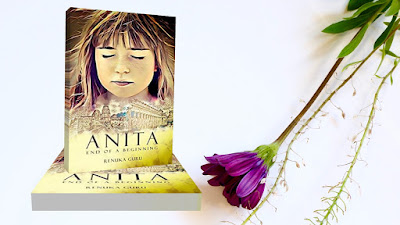 It would be wrong to say that the novel is totally based on Anita. She is some sort of a lead character, but she does not overshadow the auxiliary characters falling under her periphery. Anita hails from a Scottish family. When she was just three-months-old, the cruelty of fate rendered her orphan, and soon she was picked up by an Indian family living in Edinburgh.

The Indian family of Ramaa and Gopalan has only one child: Hari, a boy. They are good at heart, but conservative, but still manage to find meaning love and purpose in their lives despite the cold weather and the dull treatment from the white natives in a foreign place like Edinburgh.

There should be substantial reason for the adoption of a Scottish girl in their family. Well the Indian family was seeking for a companion for their only child Hari. This act is mix of both: merit and selfishness. It portrays how a society works in the favour of a laddie.

Another startling aspect that you may find in the book is that since the very beginning, Anita (sometimes lovingly referred as Ani) is forcefully imposed and left in the lurch in the heat of cross-cultural differences. Since her early days, she has been kept informed that she is an adopted child. Hari’s grandparents are skeptical, as they hold a hunch that this girl may do something inauspicious in the future. Gopalan is taken for granted, he is naïve of his own type, and Ramaa is forbearing but vapid, she cares for Anita, but that is not enough. As a reader, you might dig to sympathize with the little child.

Transgressive feminism tried to surface in the novel in snatches, but it could never get into the mainstream narration like the works of Anita Desai and Shobha De. The best suppressed example is of Bert – the piano teacher – who slyly exploited and molested the little girls in his classes.

Chugging ahead, we see the author tried to balance the childhood days of Anita by giving her some solace in the company of Hari and Katie, a girl from neighborhood. Her days at Edinburgh are good, but she, on the other hand, remains super excited and open about India. A few initial chapters throw assumptions that the novel is more about a child’s coping up with the people whom she love and hate. But it is a coming-of-an-age novel, both children Hari and Anita grow, go to school, do some bullying, get ready for college and beyond. That pace of events was fast, and probably not needed, because once the children grew beyond teenage, romance and affairs add up in the story. From a family drama, the novel turns into romantic heists. The author portrayed the right type of feelings at that age; however, by doing that the novel loses focus.

After family drama, gender discrimination, romance, and cross-cultural differences; towards the end, the novel surrounds itself in tragedy. Hari moves to the USA for higher studies, Gopalan with Ramaa and Anita move back to India for some reasons and here Anita explores new aspects about life. Unfortunately, things didn’t turn out as per her tenacity – she could not differentiate life in India is not as cool as in the UK. Trapped in the overtures of some rich Indian guys, she meets her fate: she suffers beyond irreparable. At this point, the novel gains utmost intensity and the overall mood of the narration change into some sort of melancholy. You might feel as how’s that possible, is India such a vile place for a naïve foreigner girl. The character of parents in India is very lame – probably they didn’t care, thinking Anita is not their real child. Things turn out utterly sour for the entire family. Shame and privation! Talking about some reality, Anita behaved too modern and bold, forgetting her limits, or say she ignored the societal norms and morals. She got trapped, drugged, and what not…

Strange the family could do nothing to alleviate her pain. When she secretly moves back to Edinburgh, things didn’t turn right there as well. She is finally dragged into the dark arena where a woman is considered only an object for pleasure. Her fate changes drastically…she sounded like cursed and doomed.

In a short novel, with 218 pages, a lot of events happen that seems like stories within a story. Do you think it is good? Maybe, if one is a racy reader. Overall, the story is spiced up, like a movie. But in the end if you brood deeply, it comes out that cross-cultural lives aren’t meant to be simple, there are sacrifices to be made. Too much experiment with life, at times, brings untoward consequences. Probably, that’s why some people are afraid of change, like the parents-in-law of Ramaa. The reading experience is good, but the effects that the novel leaves are tragic as someone caught in the smoky twister.

Too many themes may look crammed up in one, but the author tried to justify all with a benign panache. Renuka as an author shines, her narration and language usage and other aspects are simply superb. Also, her days spent in the UK are evident in the novel. The description of two backdrops (the UK and India) is incredibly imagery. By all means, the novel is not shallow. There may be pitfalls but it is worth a read.