Book Review: A Thread So Fine by Susan Welch

November 17, 2019
A Thread So Fine is an apt title and an evocative story of two almost inseparable sisters: Shannon and Eliza. When the story kicks off, they are chirpy teenagers, all excited for college and romance. However, fate has something different in store for them. 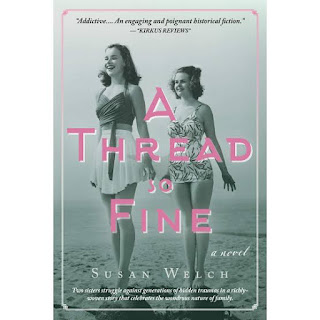 The sisters with their family lives in St. Paul, Minnesota. Shannon is around eleven months elder to Eliza. However, it is Eliza who is keen to achieve higher sense of achievements in life i.e. education and career. Simply, she is too ambitious for a traditional society like St. Paul. On the other hand, Shannon would love to emulate her sister, but Eliza overwhelmingly cares for her.

As the story chugs ahead, Shannon suffers from severe tuberculosis, subsequently she is hospitalized for ten months in isolation and undergoes many surgeries. Finally, she is saved from the deathbed. On the other side of the story, Eliza begins dating David. But well before their story could reach a point of culmination, she is being assaulted and raped by Patrick, a war hero, and David’s cousin. Things get worse from here onwards. Eliza is deeply perturbed and becomes pregnant. Since the story is set in the realms of Catholicism, Eliza prefers not to divulge the inside story, but she is sent to Catholic Home for Unwed Mothers. There she gives birth to a baby.

Now onwards the saga of family secrets and two sisters’ separation begins. With some help from Mrs. Perkins (an eminent personality), Eliza moves to Cornell University in Ithaca, New York. This move cuts all the ties from her family. While Shannon upon recovery, gets into nursing career, for the sake of Eliza’s child.

The novel is poignant in exploring the grim and harsh societal realities post the World War II in a modern country like the USA. Both sisters suffer unspeakable privation thrown at them by the forefront face of the society. It’s relieving to see that Ithaca is a progressive society which paves way for Eliza’s glorious life, unlike St. Paul, in Minnesota.

As a reader you will feel a sense of sympathy and guilt for the circumstances of Shannon, who always finds herself at the end of sacrifice. Sometimes for Miriam, the Ross Family, or her deteriorating health, or for mother Nell whose secrets surface from time to time, in snatches.

The novel has part history, part changing political landscape of that era, and of course family drama. It’s hard to believe for people outside the USA that even in the States such harsh and inhuman treatment was handed out to women in need of special care. The author has pointed that more than any societal burden, both girls suffered more due to catholic semblance of the society.

The story of a family getting broken for silly reasons like health and sexual assault is really heartbreaking. Imagine two sisters couldn’t meet for no reasons strong. Literally, they remain separate for almost two decades. Still, the best part of the novel is the unposted letters of Shannon to Eliza. A lot of reminiscence gets scratched through the wording of the letters. Melancholy and intensity runs parallel throughout the story. The story is one and such that even after you close the book – the characterization and their lingering with the fate will keep you awake at many nights. Highly recommend novel.