Book Review: In Borrowed Light by Barbara and Stephanie Keating

The novel features stories of three families, Hannah Olsen and her husband Lars own Langani farm, so they are at the center of the story. Else, these three families are closely tied and try to live together amid the turbulent times of independent Kenya, where the black natives do not regard white people part of their country. All three stories run differently, with each entwined in its own troubles and secrets buried deep down in their hearts rarely surfacing to acknowledge each other. 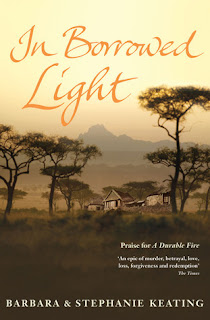 Off the main story, Suniva and James’ teenage love story is quite captivating. Suniva is a white girl and James a black native of Kenya. James family history keeps disturbing Hannah Olsen, mother of Suniva. Therefore, she tries all her best tactics to part them but fails in the end. In the end it is revealed why James’ father killed Piet, the brother of Hannah Olsen.

On the other hand, Sarah a wildlife photographer, with some dull past, is married to Rabindrah Singh, who tries to cover stories like James Bond but dies because of his daring endeavors which exposed the Kenya’s biggest poaching racket.

Next, Camila Broughton Smith is into modeling and designing career. But she gives up all to marry a stolid guy, Anthony Chapman, and settles down in Kenya. The families keep meeting and traveling and try to solace each other like good old school friends. The story has no order of events; it is more of like a personal diary of three different people.

Suniva and James are impressive with other children in the story. The writers have worked impressively to bring alive the terrifying legacy of this African country, Kenya - once a British colony. How the after effects of colonization can add sorrows to people’s lives is very much evident in this book.