August 24, 2014
Munoo, a 14-year-old orphan, is the hero of Mulk Raj Anand’s great novel Coolie. The plot revolves around him, and accordingly, the storyline is based on humanitarian values like his previous work 'Untouchable'. 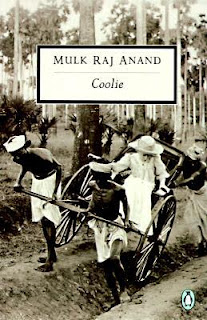 The story portrays the clever methods and the wits taken up by the hill boy who's forcibly out of his hilly village to earn a livelihood. In the process, he gets exposed to the world's depressing realities. In the quest of identity and some means for sustenance, he takes the ways along with some equally socially and economically downtrodden people to towns and cities of India. The plight of his fate stretches from Shimla to Bombay, but he finds no solace. Often found labouring hard either as a home servant, factory-worker, or rickshaw puller. Everywhere he goes, is being exploited, making his survival a fight to fend for himself.

The fight for survival highlights, with unrefined propinquity, the sad providence of the underprivileged people of colonial India. Collectively with Untouchable, Coolie reinforced Mulk Raj Anand as one of the prominent English novelists of India.

The book silently laments the presence of British Raj and Caste systems in India. These two aspects deteriorate Munoo’s life so much to an extent that he dies a miserable, unwanted death well before his time.

On literary terms, a resemblance can be drawn between Kim (by Rudyard Kipling) and Coolie. However, both books are great in their own portrayals. Though Kim has some good English wits, Munoo is just another Indian innocent orphan.