The Settled Homeless by Rover V. is a profound work of prose master storytelling. The impeccable narration of the novel gradually allows readers in the world of one highly talented scholastic character ‘Dr Theodor Rae’ aka ‘Ted’. As you chug ahead and take a sneak in the silent realms of Ted’s brilliant academic world and its allied achievements, you will be hit immediately to realize that he is bereaved of all basic social and family bonding, allegiance, brouhaha, and most importantly love. Academically and professionally he is successful but as forlorn as desert. 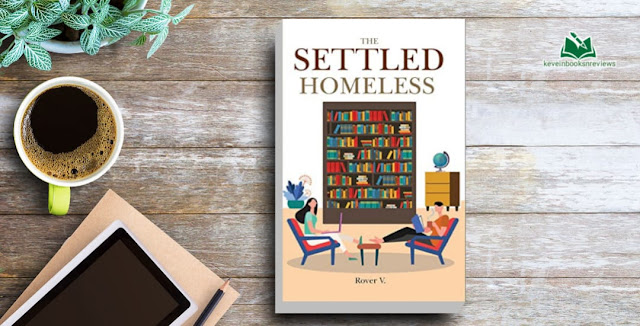 As it sounds, the novel is part romance and part biographical with a strong dose of philosophy running in its backdrop like banter. The writing style doesn’t come comprehensively easy to readers, the book demands undivided attention and patience of readers so as they could get acquainted with its protagonists and a long cast of auxiliary characters.

The irony of the novel is that it’s about a homeless man but he is also a global citizen. Ted has had nobody after his grandma passed away when he was in school. But as one edge of luck favours, he wasn’t a destitute. He had immense land and estates that kept his academics afloat, taken care by Nizam Uncle. His struggle from India to settling abroad is praiseworthy, however, is captured with slowed subtlety.

Having done with the residential school where he was patronized by Father Mathew, Ted chooses to do engineering in India. Since he was a brilliant student, striking a chord with the teachers and scholars came as blessing for him. For postgraduate in India and doctoral studies in the USA, Dr. Sen assisted and mentored him. Ted was exceptionally good with maths. It paved way for his professional stints with researches, universities, and MNCs.

The author has humorously captured Ted’s schooling, college and university days, where he was put to accommodate with people coming from different cultures and diverse backdrops. Some were funny, a few compelling, and many he befriended. But at large the looming feeling of being alone kept him busy with his aspirations.

Nelly’s part is interesting, substantial, and with some action. Whether she is fictional or real, Nelly gives a stir to the story. She has tragic family story, drops midway off the college, and makes a heady comeback. To many, she may be bordering on anti-social errands, however, Ted connects with this student citing her as brave, bold, and resonating with her life’s aspirations. Nelly somehow had similar background as Ted. When time and fate worked in their favour…they not only meet, live together but also sense a need of creating a home with intimacy and warm feelings of love. During the Covid pandemic crises, the duo lives together and often get indulged into unending debates on a gamut of topics like adorable couples. The Nelly component or say her presence makes the novel romantic. Ted has a love story to share and that is with Nelly.

If one keenly observes the world of Ted (or the story of the novel) it lies scattered into three parts: before meeting Nelly, life as an aspirant, and with Nelly.

It’s all up to you as what corner of the story you would like to take along with you. The world of Ted resonates with quite a number of interesting anecdotes, philosophy, living and travel experience. However one fact is fact that Ted was really a global citizen, well-read and well-traveled.