Book Review: Me No Pause, Me Play by Manoj Kumar Sharma

Manoj Kumar Sharma is a terrific author about the society change. I have read other books of him, in each he brings forward some or other curse of our society and then offers solutions through a rich fictional tapestry of stories. In the new novel 'Me No Pause, Me Play' he marks the achievements of two women from different ends. The story takes the center stage around three characters broadly i.e. Dolly, the victim, Rajat, the tormentor, and Jasmona, the problem solver. 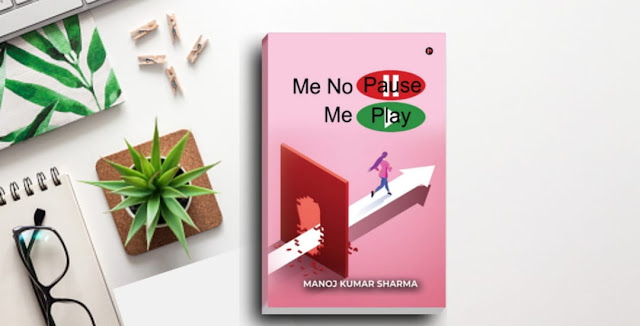 Dolly and Rajat are married for over 30 years. Dolly is a housewife, and Rajat works in an MNC and always looking forward for his promotion. He is so much in his professional life that he ignores his wife like anything and does not understand her mid-age health crises like menopause. On one auspicious day when Rajat was attending a company event and was likely to be promoted, he gets a call from hospital. Filled with pent-up frustration, somehow he manages to reach there and find faults in the hospital staff. He wanted the treatment to be done fast, so that he could resume his office duty and get that promotion on time. However, fate had delayed his plans and for how longer….god knows?

The author highlights the issues related to menopause and how perilous it could be if not taken seriously. Dolly was taken for granted on this matter, as a result she not only developed several sever medical complications but also operated in emergency.

On the other hand Rajat cares nothing but wants total attention of his wife. However, on important day in his life, he gets a call that his wife is admitted in the hospital facing many medical complications. It was also the wedding anniversary of both.

Rajat tried to pass on the Dolly’s burden on his children but he did not get any support from them, settled abroad. He has no caretaker. However, in the hospital a chance meeting with his ex girlfriend Jasmona ignites some changes in him. But it was a proper plan by Jasmona after she heard Dolly’s story of pain and neglect. Jasmona’s words and advice stirred a magic of transformation for Rajat. He begins working for his wife as a nurse, caretaker, and much more. So much so that his office, career, and promotion is left behind. He accepts his quirk of fate.

At times the book is riddled with medical jargons, however, it was totally fine to nudge the plot ahead. Jasmona wants to prove something, she adopts a new way to treat illness caused by menopause. She actuated the positive treatment. She took depression and stress from Dolly’s life, as a consequence, her health improved drastically. Manoj succeeded in shaping the story in a terrific tale of woe and plight of one woman. He made ordinary woman’s life look extraordinary. That alone is enough to blaze a trail and immerse any reader in a human drama of depth and psychological insights.

The story is short, however, comes with a message. If you love your family, you may like it, the message and all. Writing is straight and simple. The book is a coveted effort to do something meaningful for the women of our society, who are true pillars than just objects of desires for men. Fast-paced, the novella is a joy to feel expressed in the favour of women of our country. All in all, another masterpiece from the author.