Book Review – Krishna Deva Raya: The Boy Who Would be King by Abhijeeth Hiliyana

‘The Boy Who Would be King’ is the first book in the Krishna Deva Raya series, traditionally published, written by Abhijeeth Hiliyana. It’s a historical fiction staged against the medieval period of South India. 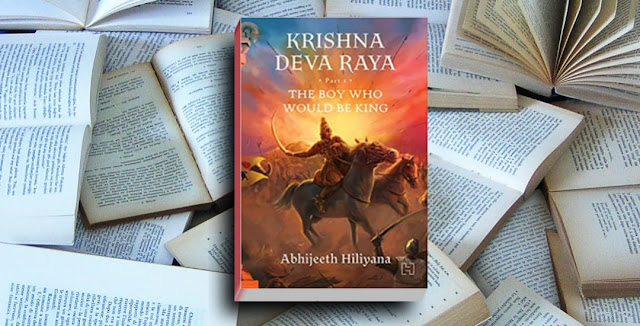 The novel narrates the rise of a young man named Krishna to a prominent position during the Vijayanagar Samrajya’s hey days to fall due to internal conspiracies and conflicts and invasion from outsiders.

Krishna is a son of Mahasenapathi Narasa Nayaka in the sovereignty of Emperor Saluva Narasimha. As the story commences, Krishna and his brother Vira head to Gersoppa region. It’s on the verge of falling under the attacks from Bahmani forces that are operational from Goa. The Bahmanis have assigned Bahadur Khan to seize Gersoppa. If they lose Gersoppa, it means losing the entire Vijayanagar Samrajya. Some pages in the story and it become evident that the Vijayanagar Samrajya was rebuilt delicately and Bahmani is their biggest external enemy.

As soon as the leadership of Krishna destroys Chittakula city port and wins back Gersoppa, he rises to rewards and recognition in the state…more or so because of his father’s high rank. But there are many that plot conspiracies to bring down the emperor. Tuluva Krishna has uncompromising patriotism towards the state, like his father. But will it be utilized at the right time and place?

The novel builds the story gradually, step by step. Readers will get insights in the mechanism of state working, personal and family life of Krishna, and his father and brother’s role in keeping the state safe. But the question is for how long?

Apart from the protagonist, other auxiliary characters also shine with their roles and idiosyncrasies, making it a complete historical novel with a long cast of characters from many sides. Krishna falls in love with Chinna, a temple dancer. Appaji, the prime minister of the state, acts as a legal advisor to both boys. It’s not a straight and heavy historical fiction with action-packed scenes. It has everything but in a balanced proposition.

As you reach midway, you begin feeling that Krishna is working for the right people and kingdom. But after the death of his father, things turn untoward for him. He and his family is told to move to Kashi. All previous ministers of the kingdom are removed; new and unknown faces control the weak emperor. Krishna fumes with anger. Will he do something like coup or simply walk away as instructed? Will there be someone who could control the uprising from the small tribes such as Ummattur and many? If not Krishna, then who will save the Vijayanagar Samrajya?

The novel ends at a cliffhanger and it will be exciting to read the next book in the Krishna Deva Raya series. Such a profound historical saga but delivered in such a simple prose like narrative. Undoubtedly, Abhijeeth Hiliyana writes with a fascinating charm. He transports readers to that historical era, in those streets, and palaces and battlefields…much looked surreal as experiencing some Hollywood style movie. Worth time and efforts!