Book Review: The Unexpected Trail by Nisha B Thakur

The Unexpected Trail by Nisha B Thakur is an extra layered drama packed riveting murder mystery with romance as one of its undercurrent themes. The story is presented with a superb flair of narrative. The plot remains within a boundary of few families but the traverse of the novel is lengthy, but not at all banal. 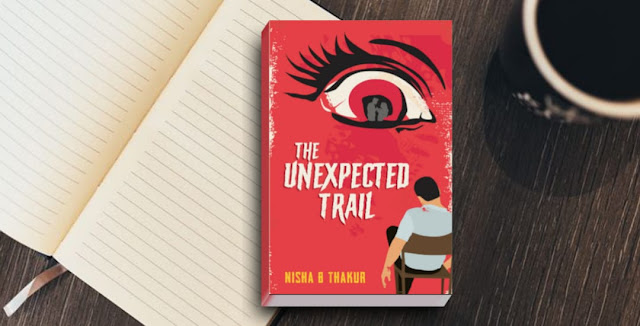 The novel features love story of Raj and Tanvi, residents of Mumbai. They both have sad childhood, struggle for career aspirations, yet love binds them. They meet while working for a same company. However Raj was expelled from the company due to Tanvi’s friend Neha.

Initially, Raj is loathed for being poor and no trace of family. Tanvi has no parents. Her maid Ganga Tai and friend Neha don’t like Raj for their personal set of reasons. Raj and Tanvi live in the same house. While partying with friends, one day Tanvi finds a dead person in her kitchen. Here onwards, the novel turns into a murder mystery genre. Inspector Yash continues solving the case, but on the other hand personal conflicts of Raj, Tanvi, Neha, Adi, and Soma keep going. It makes the novel unputdownable.

As the investigation begins, Tanvi is the prime suspect. But why would she kill a stranger in her home? This question backseats Yash’s doubts. As the story progresses, Soma connection pours in. She is a famous TV actress. And the person who was found dead was her husband Deven? That produces a new maze of complications.

As the plotline chugs ahead, the murder mystery deepens with hidden secrets of each one. You will love the hate chemistry between Raj and Ganga Tai, being a maid she never wants Tanvi to marry him. The novel is woven with mind boggling family secrets and dark aspirations of the characters. But the question at large remains unanswered, why anyone would kill Deven and for what reasons? As the characters draw in limelight, their connection with this dubious man surfaces, the story looks way beyond than a usual murder mystery.

For Tanvi and some like Adi it was indeed an unexpected trial. They were dragged while the silent offenders like Ganga Tai and Raj and Soma roam free. It’s a multi-layered novel with family history, drama, relationship, vengeance, and a murder in between. Who is blamed…who goes behind the bars…and whose story is credible – all this bundles up a riveting saga of love, revenge, hate, and crime.

Nisha Thakur is a matured author. She drove the suspense till the last line. It’s a well-though out and meticulously executed novel with brilliant show of narrative. Kudos to the author! Highly recommended!