The Whistling Schoolboy by Ruskin Bond is a slightly short ghost story on a phantom bicycle rider. Set in much familiar landscape, Mussoorie. The narrator is taking a late evening walk on a lonely road. It was a bright moonlit night. All sorts of trees like oak, pins, deodars, etc. were creaking, as craving for some company. 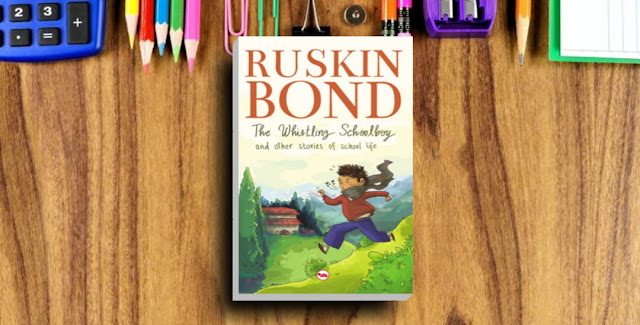 In Ruskin Bond stories, you will never find a story going ahead without trees at his side. The narrator is walking in the silence of night. In fact, night walking is popular in Ruskin Bond stories when he is to tell a twisting ghost story. He remembers an old song from his childhood days:

We’re not a crowd;

We’re not even company

Soon on the stroll, a crumbling cemetery comes in his sight. It needed an immediate repair. Some of the graves were open with bones and rotting skulls. The narrator picks up one skull but it breaks down as it was made of dust. He gives a concerning thought to the cemetery. Suddenly a boy around 14 or 15 years old passes on a bicycle whistling carelessly. By his dress, he looked like a school boy, whistling loudly and chirpily. The narrator had only a glimpse of him before he banishes in the silence of the night.

The boy comes back, the narrator says that his cycle doesn’t have a bell. He smiles and speeds up. Next day, he finds that some repair work is going on in the cemetery. The narrator sees that the collapsed grave had a date of 20 November 1950 and the letters of the deceased was faded. He checked with the church register. The dead was Micheal Dutt, aged fifteen. The narrator grows curious and asks an old lady about the boy. She said that Micheal Dutt was a beautiful boy, who would ride bicycle like a pro to fetch anything from the market. But one fateful day, he was struck by a truck and died in the hospital. So, the narrator solved the mystery of that whistling boy. He was none other than Micheal Dutt. The narrator heard the same whistling a few more times from time and again.

One time when the narrator was sick and on bed, the boy whistled and gestured to join him. He follows the boy but only to realize that it was calling him at the edge of the valley, it was a death invitation. Now the narrator walks alone on the road and hums his old song for his own company.

It’s a beautifully written short story. With sublime climate and nature around, the story looks surreal, enthused with some cinematic charm.