Book Review: The Legend of Bahirji-Naik by Shreyas Bhave

The Legend of Bahirji-Naik by Shreyas Bhave is an engrossing historical fiction built around the Maratha Swarajya. There have been many books in Marathi eulogizing Shivaji, when we talk about the Maratha history. So, this novel is a detour from the mainstream genre. Thus, we do not see here Shivaji as a protagonist. However, his influence runs underneath way enough to even cast other less-famous characters. 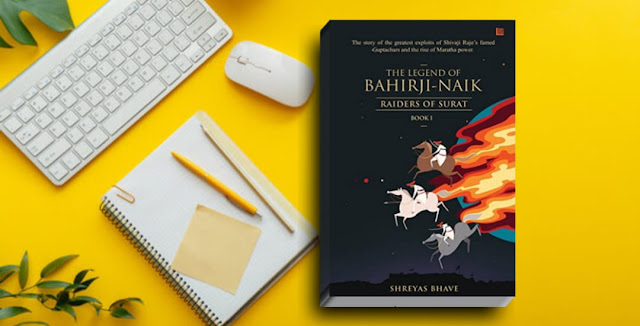 Talking about the storyline, it’s a well-laid and well-thought out novel. The focus of the novel is the crumbling Maratha Swarajya in 1664 and how to revive it financially and morally. Raje Shivaji is stationed at Rajgad. The Mughals have tight grip over the regions around, with Pune as their base. Surat is a city that can change the fate of any struggling ruler. It’s bestowed with trade and gold. Rumours have that it has a lot of gold riches. In fact, the author kept Surat as the main backdrop of the novel. He has provided vivid and rich description of the streets, decks, traders, and the Mughal influence.

To be noted that this is the book 1 from the series: Raiders of Surat. Right at the beginning, the author cleared many historical aspects. Good thing that he started with a nice prologue and cleared the list of characters from all sides. The novel features duo detective cum spies…yes… Bahirji-Naik are two people. Bahiriji Bandal and Sadashiv Naik. They are chief spies in the realm of Raje Shivaji. And this time the Swarajya was at a stake, as they cannot take direct fight with the mighty Mughals. They need to be clever and consistent. The duo plans a raid on Surat for its gold. Once Raje Shivaji’s coffers are full, they can enhance and probably end the Mughal rule in their province.

The rest of the novel follows as how both travel and plan that D-day attack. However, their first pick is that orphaned cowherd Shashidhwaj who valiantly fights with them till the end. Probably in the next book, he may lead the story.

It’s a well-rounded novel that lays open the underbelly of Surat. In fact, auxiliary characters and antagonists are perfectly sketched. During the raid a lot of action and drama ensues. In particular the author took care as not to go biased for any particular side. He with an equal élan showed how the corrupt Mughals decayed during the raid, while the British people were able to save their company.

The Legend of Bahirji-Naik by Shreyas Bhave is a rich novel from the history and cultural point of view. Shreyas’ novel sounds substantial with a solid story and intriguing characters. It’s not a document on history. A powerful novel with great insights about that time!