Book Review: Land of Mine by Saurav Dutt and Satwant Singh Johal

Something that started as a normal-looking farmers protest grew into a movement that snatched attention from international media. It looked clear that the Indian government overshot the intensity of the protest.

“This is what happens when you live in a bubble. It’s unprecedented; they are going to make the government blink.”

In democratic countries, protesting is a normal chore but in India it grew to a whole new many-layered movement like we studied in history about India’s struggle for freedom. 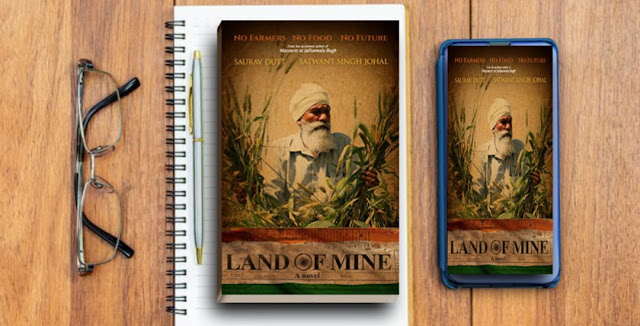 The powerful novel ‘Land of Mine’ by Saurav Dutt and Satwant Singh Johal crawls in the Indian farmers protest camps with a set of characters that come from diverse background and regions. There is a cluster of people – many in the form of farmers protesting against the government’s 3 laws that can debilitate the India’s agriculture sector so that some corporate players can cash on the opportunity – and there are some from the government’s side like Delhi police trying to stop them by beating and doing many unwanted tasks.

The novel tries to understand the crowd that is participative in the protest from all angles. To place things more clearly, we are introduced to an old man from Punjab named Sukcharan. He has no family but a lot of land. Initially he is unmoved by the protests. But as he jumps in the maddening crowd, he gets to see the real intensity of the situation. He is first beaten by the police but he didn’t leave the ground, and in the end victory visits them.

Dodia is a police cop, subtle stereotype and brutal, yet compassionate towards the humans protesting at the border. He experiences change of heart while guarding the reporter Ms Garrick from BBC, England. Sarbat and Labh portray the abject poverty and misery from the same village of Sukhcharan. The protest movement was so big that women and children suffering from shortage of food and basic facilities became a part of it in some hope.

The authors also stated that it’s considered a peaceful protest until the event of Red Fort. Things changed for worse, the Indian media and the government commenced labeling them as separatists, Khalistanis, and terrorists. Soon, the movement was associated with anti-nationalism. The government was more concerned about its self-image than actually curbing the protest.

“The government is so scared of foreign audiences understanding what’s going on out there on the ground and being further embarrassed. Any attack on their narrative is an attack on their ineptitude in handling these protestors; they are more concerned about preserving their image than dealing with lives.”

India is a land of mine owing to its diversity and mass cluster of population. The farmers movement was no less than a mine which was about to explode, but thankfully government took back its autocratic laws. The book doesn’t extol one community of protestors and farmers, rather it showed the trumpet call of unity despite many obtruding actors that tried to bring it down.

The novel housed as many angles it could gather via different faces and perspectives. Saurav Dutt’s control over language was perfect and tight. Readers will especially love how the author built ambience of India’s village….the rising smoke, trail of dust of bullock carts, scooters, and tractors.