Book Review: The Land of Ataraxia Genesis by SS Merce

The Land of Ataraxia Genesis by SS Merce is a super fabulous fantasy thriller full of action, adventure, with amazing people and places. The novel is set in some fictional Elswyth Sea, in fact, the entire book is highly imaginative and fictional. 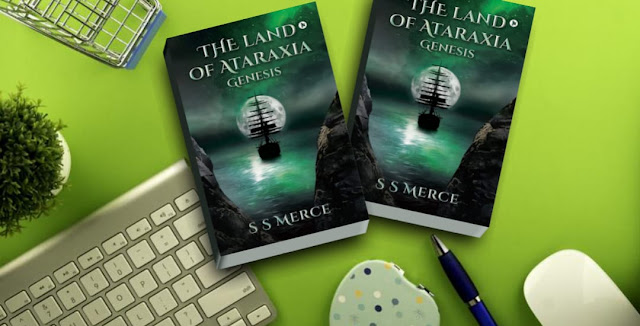 The novel follows a story of ship named Caelesti Viatrix and its crew. Right since the beginning, you will get to know the rich battle history of the ship and its heady hip-hop culture. The author took all efforts to create an ambience in the ship. As famous as folklore, their ship is legendary.

Its wooden floor was unmarked by rotting blood or sword marks from a battle unlike ships that usually sailed the Elswyth Sea.

It could have been better if the author has given a character list or map of places right at the beginning, yet you can manage them if read carefully.

Most of the crew members like Kai, the captain Magellan hails from the Land of Prisca. They are out in the sea to find some person named Sinan. As the ship trundles through the adventure and adverse conditions of sea, they are in the vast territory of ‘The Land of Ataraxia’, which is further divided into some realms. And each realm is recognized by its creatures and allied aether.

As the story chugs ahead, it becomes clear that the ship was anchored by Sorin people so that Academy can sent them to kill others on other realms. Someone’s kill is their benefit. The Academy is being run by Mavens, segmented for each faculty.

As towards the end, readers are thrown into loop when someone from the ship holds the position of Navigation Maven in the Academy. Actually many characters hold many narrative in the story. Yet if you club each one’s ideology, it becomes a fascinating read and could throw one into a world of inextricable startling joy. Read on this novel if you love to explore fantasy genre like a connoisseur.

The author leveraged her superb writing flair, however, too many characters put some dilemma otherwise it’s a good read for all seasons. The novel has inclination toward Greek mythology and looks set in history with the queer peculiarities of its characters. In final words, a riveting novel if you read with your own comfortable pace.