What happened between Arjun and his charioteer Lord Krishna during the battle of Mahabharata? Did they converse about various dos and don’ts? It was their conversation that forms the essence of Bhagavad Gita. In a sense, it was a timeless conversation. 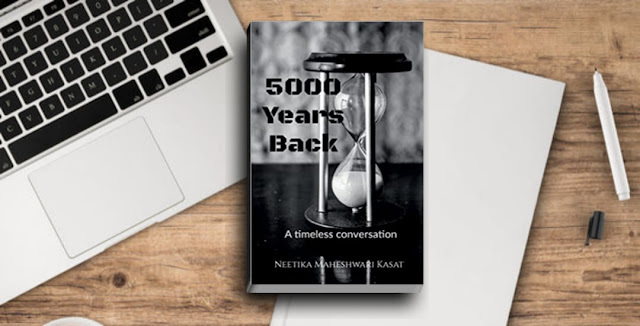 During Mahabharata, Arjun was hesitant to kill his cousins and their army. He was in dilemma about duty, outcome, Karma, and so on. He was brought to light from ignorance by Lord Krishna, who was siding with the Pandavas.

Based on similar limelight is Neetika’s novel ‘5000 Years Back’. It’s neither a chunk from Mahabharata nor a retelling. It’s a contemporary and very light novel, with illustrations, inspired by Hindu Holy Scriptures like Fifth Veda.

The novel is full of light content and relevant illustrations. As the story opens, Yudi and his brothers dive into the past life. The lead characters of the novel are Aarj and Duro. Yudi and his brothers are cheated by Duro in family business. They were rendered poor and helpless. To their rescue, comes Uncle Kris. He organizes a boxing event where the loser has to donate all his property to the winner. Aarj and Duro are champions…but their rivalry and prejudice bring them to the stage. The boxing champion is a big event. Kris opts to train Aarj, while Duro takes huge money from him. Being an avuncular uncle, he helps both.

As the D-day arrives, Aarj beats all to reach the finals to face Duro. However, just before the match, Aarj is confused and rather unwilling to beat his own cousin brother, and then begins the teachings of Kris…that forms 18 episodes…in the form of conversation.

The episodes are the teachings from the book on diverse subjects. The book lays out the vast ocean of knowledge that discusses compassion, knowledge vs action, re-birth, coverage on three phases i.e. ignorance, goodness, and passion. The teachings and insights related to life and Karma are way cool to read and implement in life.

For instance, the third episode is about Simple Mantra, the path of knowledge and action. One should take action after acquiring knowledge.

Being hesitant means breaking the balance between knowledge and action. However it’s also stated that while one goes for action, he is worried about outcome, which is again a folly. So, one of the best preaching from Bhagwad Gita is about doing work, not thinking of results.

"Simple Mantra for people believing in action is - perform action in 100 % right way but do not worry about the outcome. Do your best and leave rest on the nature."

It’s a way great book, beyond than its genre. The author experimented with mythology, history, and modern literate techniques. In simplest terms, it’s a cool introduction to Mahabharata and Bhagwad Gita. Neetika Maheshwari’s concept is new and classic. Highly recommended!!