The Sutras by Samrat Sanyal is a riveting sci-fi with a healthy dose of mystery, suspense and thriller. The novel deals with the concept of ‘aliens’ visited the earth thousands of years back. Was it possible when there was nothing like telecommunications and internet? Could be! Samrat Sanyal’s novel follows the similar path and surprises the readers with its findings. 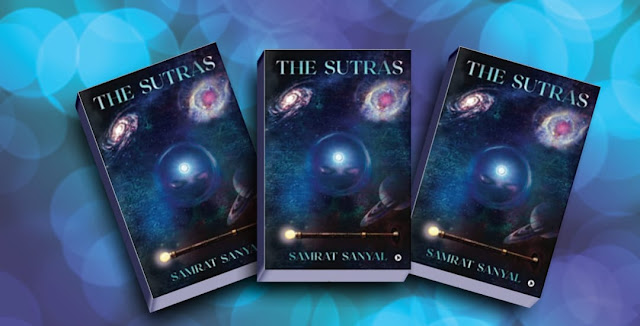 The expanse of the novel is vast with timeline shuttling between present and past, also there are many characters, yet nothing seems redundant. The main leads in the novel are a scientist named Shashi, detective Devdeep…and a few more auxiliary characters from India and abroad.

Shashi aka Shashanka Mishra is a young and promising scientist from India. In the caves of Chandeli village of Chattishgarh, he found something valuable related to aliens. Later it comes out that the aliens who visited Indian subcontinent thousands of years ago left a few hints and equipment at various places for the use of future generation.

Shashi speaks less yet he is an intelligent and central character in the novel. He unveils the Sutras found in the caves. Sutras are nothing but codes of aliens. Understanding it means getting access to another dimension, space, and possibly connection with some alien species. Hence, he begins his work and hops from one place to another for assembling the required items. But little did he know that he is not alone. However, the information regarding caves codes divulged to the whole world.

After this, the novel takes an adventurous stance. Some terrorists from Syria, headed by Azzam, are after the telepathy earphones of Shashi. The young scientist knows the value of alien codes and equipment...but if it got into wrong hands…the world will see unimaginable destruction.

From Syria to Iraq to Kolkata to Maharashtra and Uttar Pradesh, the story travels with measured pace. The story has many points but the motto is one: find about aliens’ dimension and save the planet.

The story has many angles, sub stories, and subplots – clubbing them all makes it an unputdownable. Can a sci-fi go back in the history? May be not, but Samrat Sanyal has done it superbly. It’s a long novel but not heavy. Discerning readers of this genre, and even beginners will like this book for its incredible authenticity.

Samrat’s well-worded narration nicely nudges the events in the story. The author brilliantly sketched the characters with sweeps and objectives. This aspect elevates the thrill angle in the novel whenever they cross each other. Overall, it’s a different sort of sci-fi and for sure a gripping read.