Roving Eyes by S. Mahesh is an engrossing collection of short stories taken out from the history of India, from various time periods with different backdrop. Truly, the book is about love, lust and battles of Indian royalty with respect to women. 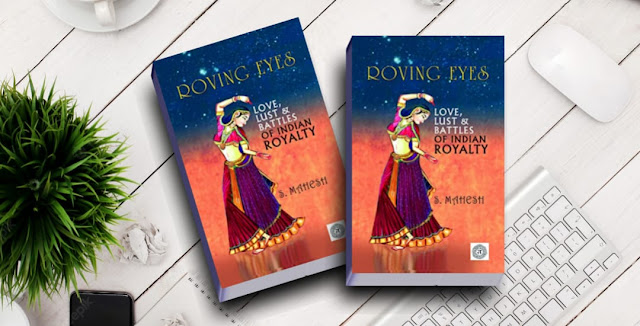 Nearly all stories follow a set parameter, the author first describes the ambience, introduction of the kingdoms, setting for impending battle and preparation and much later a beautiful woman character that will either bring peace or augment the bloodshed. The below excerpt shows the brilliance of the author while describing the opening scene of the story.

“Kalyani, the capital of the Chalukya empire, was decked up like a bride. Its streets wore a festive look: thoroughfares were spruced up and decorated with garlands of marigold.”

The book commences with Amrapali story, she was destined to be a Nagar Vadhu due to being excessive beautiful. She sacrificed her youth and love for the sake of her kingdom, to avoid bloodshed. But the irony of fate did bring bloodshed and destruction. She was so fed up of war and its allied misfortunes that in the end she opts for Buddhism for eternal peace.

The stories in the book are about women and their power that they cast through beauty. It’s not about their valour and war tactics, rather how a woman can captivate a king to thwart bloodshed is portrayed in nearly all stories. There are stories about pure love and sacrifice for instance Vasavadatta and Udayana, Helana and Chandragupta. While about lust fits the story of Hirabai and Aurangzeb. It’s said that if Hirabai hadn’t died, Aurangzeb could have been a softer king, less barbaric.

All stories are a great read, and share something valuable about their era, kingdoms, and much more. This book is a dedication to great women from our history whose heroics are lost somewhere. Like a legendry master of history, S. Mahesh brings it back to the current generation for glorification.

The narrative flows uninterrupted. The language, despite its simplicity, is classy. S. Mahesh has a rich vocabulary and employs it skillfully in the book. There are not too many big words, but even avid readers won’t be able to label the language as colloquial.

Overall, “Roving Eyes” is a great piece of historical fiction. With twelve stories the author tried to cover the history of thousands of years sufficiently with relatable female characters. It’s a must read for history lovers and even those who are naïve to it.