Karthika Sajeev is becoming famous for her Pentias series. Previously in the series, the first book was Pentias: The True Bond. In this novel, we saw how Pentias (five friends) are formed. So, if you have read the first book in the series, quite obvious you will be familiar with the characters: Aahan, Aarav, Dhyan, Farhan, and Harshi. 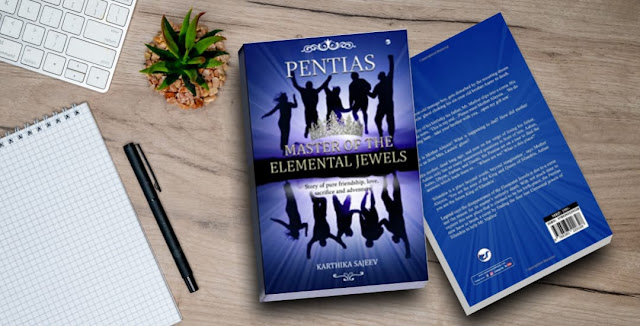 Second book in the series is Pentias: Master of the Elemental Jewels, it can be read as an independent novel as well. It’s a light fantasy thriller for children, but even hardcore fantasy readers will fall for it. The novel looks like a complete fantasy thriller with many charming aspects such as brilliant storytelling, backdrop, pace, and much more.

What’s in the story? The lead character is Aahan, his younger brother Aarav and other friends are always with him but he is the cynosure of the novel. When Aahan turns 15, on his birthday he is disturbed by a recurring nightmare related to that haunting mansion of Mrs. Laurel’s. The haunting story is covered in the first book. On the same day, his father falls sick and slips into indescribable coma.

Upon his behest, Aahan and his younger brother along with three friends embark on an adventurous journey. With an enigmatic map, key and a few words for their guidance, they began their sail in the Bay of Bengal.

Possibly it’s an underwater fantasy. Soon they are in Silandria, a different world. They have a reason to be there – to find mother Alaysia. Once they are inside, everyone calls Aahan son of Fabian and Flora. Is he back as a possible heir to the kingdom?

Within the novel runs another story of the King Fabian and Queen Flora. As the novel chugs ahead, dots are connected and Aahan gets the meaning of his life. Pentias have to bring back some elemental jewels that belong to the crown? But why, how…they? Is it related to the well being of Silandria kingdom or Mr Mathur, father of Aahan, who is battling for life in a hospital? You need to get under the skin of the story to fully grasp and enjoy this fantastic fantasy thriller.

Like a good fantasy thriller, this one also brims with supernatural forces, magical whims, kingdom stories, slaying of demons, and above all packed with action.

Karthika Sajeev built the scaffold of the story on high imagination powers. She leveraged the power of simple narration and achieved a great story in that. The story unfolds, from time and again, many secrets that will take you on a roller-coaster ride of fun, joy, and pleasure.