The title says a lot. Let me explain it in a few words. Terry Lister is a regular solo traveler who has so far tasted cultural aroma of over 96 countries, including 22 in Africa. His latest book is a travel experience which he gained while being in five West African countries namely Senegal, Mauritania, The Gambia, Guinea and Guinea Bissau. All these countries are located in the west of Africa. He travelled there like a normal man, with difficulties that a local could face. However, whatever he lists down in this diary-like travelogue is interesting and for sure stir a streak of curiosity in people who either enjoy armchair adventure or so far not tasted the soil of any African Country. 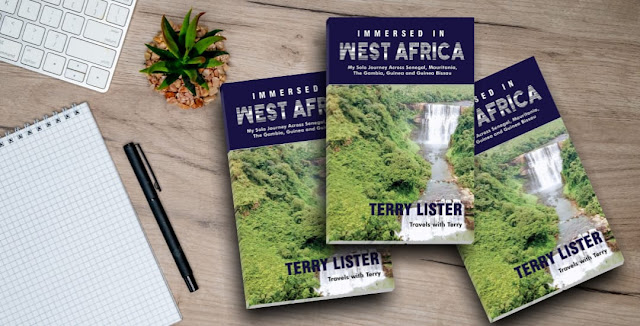 I found the book highly rich with his personal accounts of people, soil, climate, dealing with corrupt officials and locals who demanded extra money, and so on. Terry begins his journey with Senegal, which also remains his base point. In this country he visits many historical monuments and places that throw vestiges of pain, tribulation, and human spirit. One such place is ‘Goree Island,’ it was used for human slave trade and considered ‘Door of No Return’.

As far as I could gather, he had smooth time in Senegal as compared to other West African countries he lived and experiences. The worst and most corrupt one was Mauritania.

Terry, in snatches, provided colourful pictures of many places throughout the book. These pictures make the book look really credible and high spirited. No doubt the book sounded like a diary of a traveler, more than any guide or anything else. I enjoyed the information he provided about people and how these colonies of French and Portugal are fairing after they left. History runs amok with Terry.

I was exhilarated and thrilled to know real facts about West Africa but also heartbreak when I found Terry had to struggle a lot with border police, hotel staff, cab drivers, and guides. His journey was bitter sweet…he was deceived but also helped by people, especially for tea and dinner, and his motorbike guide was a fine gentleman.

He had some or other thing to share about the country he roamed. Since all these countries were connected by road, thus, getting to know basic travel routes and transport difficulties was easy. I am sure this book will help others who have Africa on their list. There have been many books and movies on Africa…but Terry Lister’s coverage on these Western African countries is anytime superior.

His travels through Dakar, Atar, Terjit Oasis and tea at Chinguetti were a class experience in itself for any solo traveler. The more I read Terry’s travel experience, the more I feel connected to him. Though it was not a paradisiacal tour of Terry…but still I am enough envious of his travel adventures. This book is mix of both: exploring and adventuring West Africa.

Order your copy from Amazon/Kindle.