Forever She by Amitav Ganguly is an enthralling riveting collection of seven short stories about love and passion, where in each narrative a female character nudges the main storyline. The book is not about romance or love stories; rather it depicts the true and unconditional love that two persons could share in life and even after death. 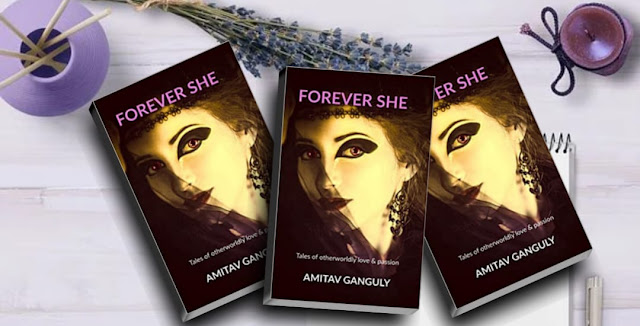 The opening story is ‘Obsession for Whom’. It’s about an Adivasi woman Mahua Mahato that goes missing. The narrator when reached in a small forest-side village, he eerily finds the place somewhat strange. The villagers are worried about that missing woman while the police are suspecting it as a case of murder. When the narrator sees the missing girl’s picture on the phone, he gets the vibes of seeing a soul mate. He feels love for that woman though never met her. In the surprising turn of events, he is guided by an intriguing spotlight pattern falling from the lamppost and the killer is caught, who was none other than his coordinator Khagen Das.

Amitav took particular care to design backdrop in such a way so the stories can be placed without causing any shallowness. Above all his highly imaginative landscapes take the stories to another level. He used diversity and variance like the back of his hand.

“As the darkness gradually set in, the volume of forest noise increased. The narrow tar road we were travelling, lined by occasional streetlights, dimly lit, cut through the forest in a meandering fashion.”

Supernatural stories cannot move at their own, the place and description of even minutest details play critical role. Amitav is brilliant with this skill.

All stories have supernatural element, their plots are entwined, but not guided by sheer horror or spooky stories. Themes based on love are well explored through the stories. In fact, reading this book means getting to know various facades of love in different circumstances. The stories are so captivating that a true admirer may fall short of the words.

Those who have read the earlier works of the author can resonate well but all his books are an independent read. Forever She re-instates Amitav Ganguly as one of the promising authors from India, and undoubtedly he is at a different level of literary intellect. The book is short, thus, it’s not good to discuss the semblance of all stories. Better pick it up in any format try it.