Retaliation of the Cursed by Stephen Arthur Martin Jr. is an exhaustive analytical book on the origins of world’s religions. But its main essence is to draw comparison of many cultures and religions of the world with Hinduism. 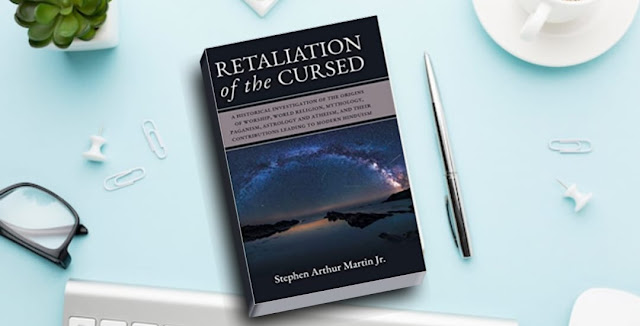 Hinduism is considered as the oldest religion on earth, however, on the other hand it’s also said that it has no trace of history. Across the world there are scores of scholars and theologists and religious enthusiasts that are still searching answers to the history of Hinduism. This book is one such attempt that tries to seek answers by studying other primitive forms of other religions. All the assumptions, theories, or concepts are well supported by vivid illustrations, copious footnotes, and bibliography. Stephen has presented a lot of similarities between many religions. And he seems curious to come to some level where he can compare the religions with same roots. He succeeded many a time but only true followers can make it out whether he was right or it was another fictitious fairytale.

At the commencement of the book, he takes Greek religion and mythology at the centre of his comparison while studying Nereus and Poseidon.  Greek and Libyan roots have different accounts of these two so-called god figures. According to ‘The Great Flood’, the versions of both gods differ, so do their family tree and culture and other aspects.

As the book chugs ahead more startling yet amusing similarities fill the basket. The coverage on Egypt gods was quite interesting and sounded unique. At many places the author kept Abraham at the helm of the book and explores analogies with his stature. It has to be because he was the patriarch of three major religions of the world. The book tried to cover a lot in not-so-bulky form. It cannot be confirmed whether Hindu mass will approve the author’s way of depicting Hinduism with respect to other religions. But one thing is sure, he brought ahead a lot of name similarities, for instance Abraham and Brāhma were the same person, Abraham had a wife named Sarai (saw-rah’-ee), whose name was changed to Sârâh (saw-raw’), and the meaning of the name changed from ‘princess’ to ‘queen.’  The root word “sar” has a general meaning as ‘leader,’ which dates back to the Sumerian/Akkadian Šara and Ištar, and is the source of the Latin “caesar,” and the Russian “tsar.” Brāhma was said to have had a wife named “Saraswati,” which in Sanskrit means ‘the watery,’ which would be an unusual name for the wife of someone to eventually be deified. But none the less, in India she was eventually considered a water deity and associated with the river Saraswati.

Far from speculative world of theologists and priests and saints, this book sounds like a sigh of comfort for them if they want to dwell on fact-supported ideologies. Written in lucid narration, the book is easy to read but it requires one to have minimalistic knowledge of religions and their allied figures that are often chanted in the worship.

Available in all formats on Amazon