Long Run (A Paradise Augmented) by T. Sathish is a riveting novel that features a larger-than-life character named Raghu from Chennai. The novel is excitingly thrilling, though it's not a crime or murder mystery. In fact more or less, the book is based on Raghu's professional life. His life is truly an inspiration for millions of people. 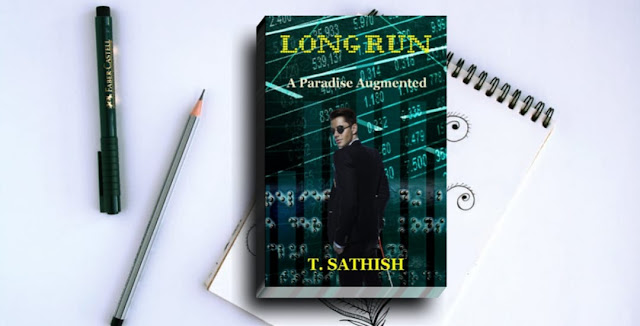 The author’s superb and straightforward narrative adds a sense of excitement to the overall performance of the novel. Broadly putting, Raghu loses eyesight but still he continues the stellar performance in the stock/trading business. As the novel kicks off, we see he is living in some secluded place owing to bad health. A reporter seeks to cover his story, which is not only incredible, but also amazing in its stance.

The novel shuttles between two or more timelines, but all are superbly connected. This is one such book that urges readers to move forward with the story, yes there is a lot of financial technical words and situations but its measured pace overcomes all the hurdles.

Raghu was an ambitious student. During the late 90s, he gets into NIM, Chennai, for a financial degree. He and Ram prepared some good research work, as a result they get placed into a well-funded startup with its mentor Gautam. Imagine Raghu earning twenty lakhs right after the college. He was brilliant with his skills. Also it was time when dot com and IT companies were just started across the world. It was a sunrise segment for them.

As you read the novel, memories from 90s will come and invoke a sense of nostalgia such as the rumour of Y2K virus hampering the IT companies and the advent of e-commerce. Raghu sees it as an opportunity; he plays with the stocks of these companies. He makes tons of money. He changes with success. He breaks with Anu, his girlfriend from NIM. But all things upend when he meets with a road accident and loses his sight. He is back to the square. You will relish that part where he struggles to build his life from scratch and goes on a search to find the love of Anu. The novel also holds a subtle and soft love story, which is entertaining and undefiled to an extent.

Success and achievement can be a heady addiction but one needs to be grounded and close to the home roots. Raghu, over the time, becomes selfish and indulged into alcohol and the vanity of the corporate world…but little did he know that nothing is permanent. The novel also studies the major events of India and the world that shook or broke the stock markets. Whatsoever Raghu was a genius and he proved that by rising back in the industry. The novel will leave a heady influence on readers, they will envy the success of Raghu and may run pell-mell to do something like him.

T. Sathish is splendid with this novel. Right from narration to editing and tone, all was perfect. A great novel by T. Sathish! Highly recommended novel, especially for finance and management students.

Buy your copy from Amazon/kindle.