Book Review: The Anatomy of a Fiction of Truth by OrpheuS Rayswarnadhir

The Anatomy of a Fiction of Truth by OrpheuS Rayswarnadhir is an interesting novel with snatches of crime thriller in it. The novel is set in entirely fictional places; however, it speaks of the current situation of our country. More often, the book takes a stance on as how religious fanatics disturb the flow of peaceful living and communal harmony in any country. 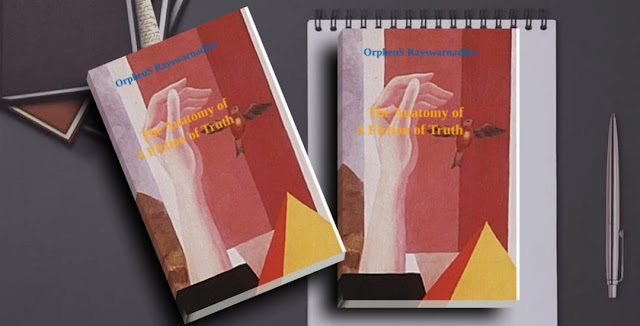 The story, mainly, about investigating the case of one journalist named Aohona Mirsa. She was killed by some goons that belonged to a religious group. This story may not be all based on true events, but it gives hunch that similar violent activities have had happened in the country since its independence and the sole reason was religious fury.

A media house is stumbled upon the murder case of Aohona Mirsa. They take it to know the facts behind the murder of that person. So, a few characters from the media house chug ahead to know the inside peaks. The novel moves at a measured pace. It is a good read with optimum focus on all aspects of literature. Like banter in the background, religious discussion persists throughout the novel and it fuels its subplots and the overall outlook.

Talking about the story, it is staged against Myalindia, somewhere in Northern part. We see that it is related to tribal people and their conversion to Christianity. In Sepan dwell tribes like Nishaks and Sepaks, where conversion to Christianity was high and it was related to someone’s business advantage. Caught in the storm were these tribes and the people of church. They had issues and pain points, so Aohona used to write their suffering to the world. But it wasn’t liked by fanatical parties like FRP or some Dal. Things turned ugly, violence, incendiarism, and killing. That’s all to alter the course.

The novel is unlike any crime or detective thriller, because it’s not fast paced. The author takes us through the procedure as how a media house looks into the case genuinely.

No part of the book was felt like rushed. The book and its story will give you feeling that the author took time to sketch and write it. It’s a well-thought out novel with perfect placement of characters and events.

You can order your copy from Amazon.