See Glass by Ido Graf is a fascinating novel with covering themes like war fiction, political thriller, spy espionage thriller, light romance, and historical fiction. The scope of the novel is so vast that you can like or dislike any character or any part of the story. The novel shuttles between past and present, and all characters from both times are highly intriguing and robust to their roles. Right at the beginning, there is mention of French Legionnaire and then we see a piece of history of 1945 where two senior SS Nazi officers trying their best to flee the country as they knew Nazi was almost over. This lays the foundation of the further story. 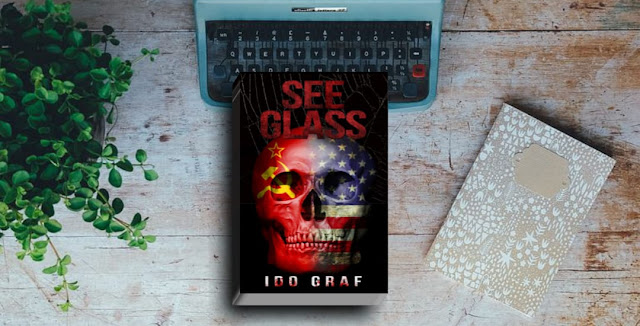 Anyway coming back to the story fronts, we first see a Swiss citizen Oscar living in England is murdered. Adam, his special body guard and also a member of French Legion, picks up Rebecca and runs for safety. Rebecca is Oscar’s granddaughter. She has a diary of the old man that narrates his story of fate and involvement in Nazi during the WW-II. Oscar’s real name was something other. He was into hiding. He held a secret that is being chased by Neo Nazi people of Germany and other countries. As said the book has multiple fronts and ends, thus, the entertainment quotient never dips. There is military action, run for life situations, spine-chilling events and much more. The novel is long and totally to the point and many characters converge for the same point. If you dig deeper, you will realize that after the surrender of Germans in 1945, they didn’t give up. Rather they want to set up Fourth Reich or Rule with the help of secrets and bulk gold that was lying in abeyance in some part of Europe.

Political conspiracies have their roots back in history, and this novel depicts this proposition in an excellent way. It is a great novel, the narration is superb. It will keep you hooked till the last page, the more you read it, the more you feel like knowing its end. All is fine, the only con is its length and involvement of too many characters…but still it makes of for a lovely and engrossing read for its discerning readers.