Trial & Errors by Ramu Upadhaya is as philosophical and riveting as other books by him. It is noted that his books take firm stance on its subjects by spanning tales by fictionalizing the characters and their allied circumstances. 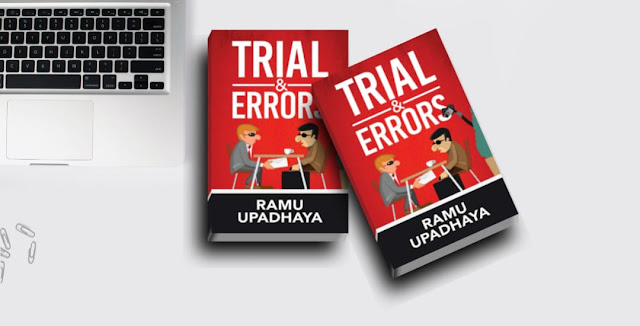 Similarly the book Trial & Errors takes a dig into corruption, brain drain, office politics, and much more. The book offers a lot of insights into the mechanism and idiosyncrasies of corruption through two brilliant yet pragmatic characters Brawn and Burner.

As the author states that corruption is a hydra-headed monster. It is true, though the novel is set in Assam and nearing North-Eastern states’ plight, but it concerns the voice of entire country. It’s evident that the growth of our country is marred by corruption. It’s like blood in the veins, be it government or independent, it’s a blood-sucking worm. Corruption is like one person’s gain is to loss of another man’s saving. The book is full of short stories and subtle references that re-iterate the power of corruption for personal growth. The novel is not only insightful but also funny to know the mainstream to rivulet reasons nudging corruption in all spheres of life. Ramu seems well acquainted with the tricks and hacks of people entangled in the web of all forms of corruption.

Other than government setups and offices, it is the obsession of extra income that draws one for doing the sin of corruption. In addition to everything, the main reason for corruption is led by greed and ostentatious behavior due to peer pressure, the following excerpt presents it succinctly:

"According to him, in a bid to compete with his friend, such an employee engages himself in money-earning activities, as he cannot afford to do the saving, earning and spending within his limited income - which his employer paid him."

Coming to the main characters, they are Brawn and Burner that work in the same office. From time and again, the book gets its philosophical outlook through their share of quotes and stories and much more.

A slight comparison of these two characters reveals a lot about their peculiar characteristics. Brawn’s nature and characterization is impressive than others. He was a journalist wrote about corruption and took interest in public affairs but later in his organization he began surveying for the real causes of corruption.

Mr. Upadhaya’s books are fun to read, they are insightful, but slightly tough to decipher the exact meaning. In his ultimate message he urges rather puts it straight – can a single man contribute to stop the corruption? May be…may be not, as “one flower makes no garland”.