Book Review: The Man from Nowhere by Saurav Dutt

The Man from Nowhere by Saurav Dutt is a prolific novella about racial abuse, mental suffering, and identity crises and other traumas that possibly a human being can go through in one epoch of life. The premise of the story is not only funny but also engaging because of its peculiar characters. The story features a recluse man who lives at a famous address in Los Angeles, California. The address is 37 Crescent Drive, Hollywood Hills. There is one home built on stilts. Its architecture is amusing but the man who lives in it is highly befuddling. According to his neighbors, he hardly came out in last three or four years. 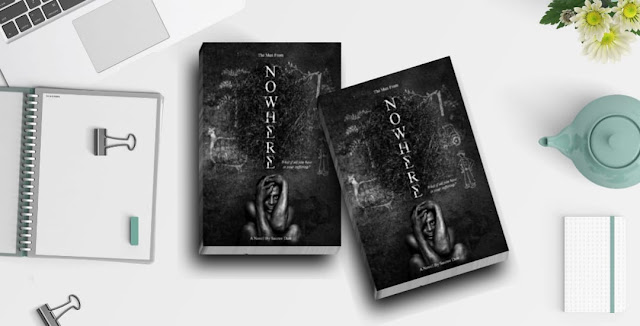 He is not in good terms with his wife named China, with whom he lived for twenty years. Now the woman seeks divorce. The man (mainly nameless) takes it otherwise, in fact, he is too weird to be understood properly. As the story chugs ahead, you will find it odd that he wants to see himself dying. He wants to design his death way. More than anything else, the people around him decimate him on the pretext of terrorism, racial abuse, colour discrimination.

The man shoots himself but he doesn’t die. The bullet stuck in his brain. What an agony? He is waiting to die every second. However, five days ago, bomb blasts occur in the downtown, not so far from Hollywood Hills. As post 9/11 Americans are too cautious and skeptical towards brown or Asian people. This novel explores that proposition. The character is perfect for that – he is a Muslim, brown, and weird in many ways. His neighbors like Conrad and Ben abuse him for no substantial reason. While the police cop Spike is hell bent to charge him for the bombings. The only respite is Linda.

The tone of the novel is sarcastic and funny. The author effortlessly preached very serious issues of blaming others in the guise of racial abuse and identity crises. All the characters are apt to the situation. The lead guy is extremely clumsy and funny. He is innocent and adorable. His only mistake was that he always thought that he was made for the Western culture, he ignored his roots and lineage and that caused trauma in his life.

Mr. Dutt’s take on racial abuse and its allied arteries is superb and to the point. The following excerpt proves it efficiently.

“He could be an illegal, one of those undocumented types,” Flower offered “he kind a looks too, I don’t know, weak to be a terrorist.”

It is a different novel. Saurav picks up the other wisely ignored aspects for his stories. If you have read him previously, you may agree with it. Be it anything, Saurav Dutt is a brilliant and terrific writer with prose-like yet sharp narration skills.