Framandi Alliance by Rashid Ahmed is an engrossing science fiction novel that is purely based on space activities and its allied ambience like extraterrestrials, anomalous space objects, colonization, and interstellar travel and so on. 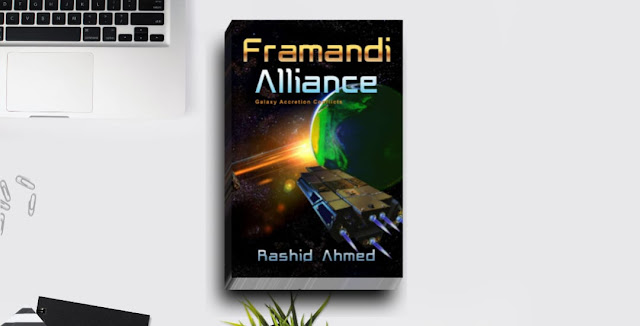 Before the main story could commence, the author introduces us to a secret organization working for space related issues named Lysi in Europe post the Second World War and dominantly during the cold war. So anything related to space exploration or cosmic missions, it is due to this organization. As you chug ahead with the story, you will meet two twin transhumans Jón and Ásta, they are sort of protagonists. They are assigned to intercept and study AL-I, the medium sized asteroid like object, discovered approaching north of the solar system's ecliptic. It stopped in the way. Looks unique but its sudden and erratic behavior could pose danger to Earth. The twins reach at Alfhol space station behind the moon. From here the most part of the story begins.

The asteroid AL-I is an important juncture in the novel that nudges the story ahead. With the help of AI assistance Shun and Kei, the crew of Alfhol gets over AL-I and the revelations are not only shocking but also pose danger for humanity. As the crew get into a wormhole they know that humanoid or species from other galaxies are looking for escape routes to avoid interstellar and intergalactic conflicts. One such galaxy is Canis Major Dwarf. The story moves on from many fronts, yet like banter in the backdrop the novel explores the concept of colonization on different galaxies.

It is a hardcore sci-fi fantasy thriller, the author has included a long cast of characters from space to earth and that makes it a little bit tough to keep record of the events. Other than that the novel is rich with sci-fi jargons and terminology but yet it will pose a hindrance for plain readers. The novel is way long, had it been of medium length and easy with jargons, this could have been a glorious sci-fi. Despite some pitfalls, the novel offers adventurous engagement, as from time and again you will stumble upon subplots and themes that not only intrigue you but also make you acquainted with space orientation. From space and sci-fi point of view, it is a rich source of literature. Overall, a well-researched novel about the space odysseys and ordeals that are known to many but it is romanticizing of some other level.