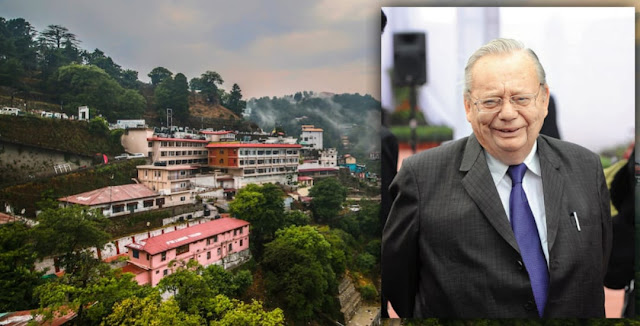 From the vault of great Ruskin Bond, Dirge of Dehradun is the latest poem on offer. Like his other work, this too is a simple one with concerns over nature. Through this poem Ruskin lays emphasis on the commercialization of two beautiful cities where he spent all his life and still lives there. He is talking about Dehradun and Mussoorie.

I wonder where the green grass went,

All buried under the new cement.

I wonder where the birds have flown,

They have gone to find another home.

I wonder where the footpath’s gone,

Right underneath your car, my son.

I wonder where the old folks go,

What grows so fast before my eyes?

A garbage dump, a million flies.

Is this the place you celebrate?

In prose you made it sound so great!

The author is wondering as the verdant grassland among which he grew is no longer in the sight. It is rather converted into cement building and roads. It is destroyed to build roads and trams and buildings for commercial use.

Similarly, he is astonished to find that birds have disappeared to some other places as their own homes on trees have been destroyed.

When the author was a child and young, the roads used to be narrow, apt for traffic. But for over some decades the population increased, so do the numbers of cars and these cars are now parked on the footpath because roads are busy with traffic.

All the senior or old people are not to be seen anywhere. Their kids and children have left for cities or busy minting money by tourists and other ways. Thus, the senior folks are forced to live in sanatorium or admitted in nursing homes for care and treatment.

The author sadly says that nowadays only garbage grows very fast. It means there is no scope for cleanliness. These two green cities used to be epitome of paradise for celebrations but it is now looks like a hell. Mr. Bond is sure that people are not happy to see these places in such a dire state. Or do they people still want to celebrate their ruins.

This is a nice and straight poem that shows the concern for saving nature of beautiful cities for our coming generations.