Trafficked Innocence by Sandesh Raj is another masterpiece that explores the shadowed side of our society: human trafficking. His books are easy-to-read but they carry intense message for the society, putting in another words, he writes about those subjects that are often kept ignored from the masses. His previous novel ‘The Burning School’ exposes the socio-economic and military conflict in Kashmir. 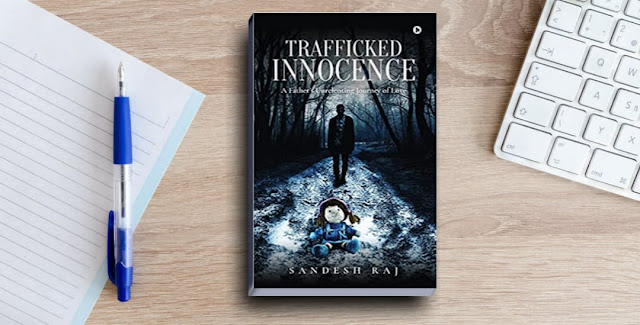 Trafficked Innocence features the story of Abhishek, a proud father of two daughters. Well, one fateful day when the family was about to travel, his toddler kid Munni was abducted. By the time they could realize anything, it was too late. The police are helpless as usual. With no clue in hand, Abhishek decides to take things in hand. He begins the chase. First, he goes to Sonagachi, a famous red-light area in Kolkata. By luck, there he gets acquainted with Bijoy Dada who runs an organization named Mukti that works to set women and girls free from red-light areas. Bijoy Dada is willing to help him but Abhishek’s impatient and aggressive nature posses a hurdle.

The author paints the grim picture of life in brothels, it is insightful yet embarrassing to think of their suffering. As he moves here and there with Dada, we readers also get acquainted with people’s trafficking way and how small children are used for slavery, begging, and sex. Though Abhishek is furious to find about his daughter, on the other hand Bijoy is mustering up all the courage to save one Nepali girl Binsa from the clutches of madams.

The story is intense, cohesive and at times looks tumultuous as Abhishek is finding a kid that is hardly a few months old. He just has one picture of her. The biggest fear is her growth and changing countenance. Thus, he is running against the time. He has to find before the time slips off. A deep look inside reveals that human trafficking is linked with many people; it is a racket that gives money. So, approaching politicians, media, or police meant negligible help. As Abhishek meet more and new people, his knowledge about this heinous field augments invariably.

From Kolkata, the story moves to Delhi and Shakurbasti. He has little success there but they were able to save Binsa. Abhishek gets the glimpse of her daughter her…but couldn’t get her. The major part of the novel is staged against Mumbai. In this city Kamathipura is the red-light area. Abhishek hates brothels and the sight of prostitutes but all leading sources indicate that human trafficking has substantial links with areas like Kamathipura, G.B. Road, and so on. He visits these places frequently but never sleeps with anyone.

Well in Mumbai, he drives a cab in hope of finding his daughter at any random traffic signal. Here he comes across many interesting characters like Rupa, Prakash, Smita, Karthik, Jamuna Bai, Kalyani, Fanta, vile Anna, and the villain Bhau. All these characters have their own share of story of pain and struggle. Abhishek stops Karthik from visiting the brothel. With Smita, he develops such bonding that in the end, it is her story that gives us an unexpected twist. Anna and Bhau are real villains; they promise him a lot but do nothing. But Abhishek has his own ways to revenge. The novel shows that a father is a big-hearted man. He can go to any length to find and care his children. Many readers will feel that the book is a sort of crime thriller. Yes, it is that exposes the underbelly of human trafficking. It is also shocking to see that Abhishek hardly gets any help from the system, thus, it is clear that in our country laws to curb human trafficking are not in place.

It is a novel that is full of story, covering various locations. Sandesh Raj has evolved as a writer. In this novel, he kept the tone engrossing despite knowing that search would be at selected places, thus, to avoid repetition he involved others’ stories to keep the momentum alive. The novel is neither hurried nor speedy, it chugs ahead with its own pace.