Blue Eagle by Sharada Kolluru is a riveting novel that blends crime and romance genre into one. Running up to 266 pages, with segmented into 4 parts, this novel features the stories of two lead characters Neil Randhawa and Moe Somani from different countries. 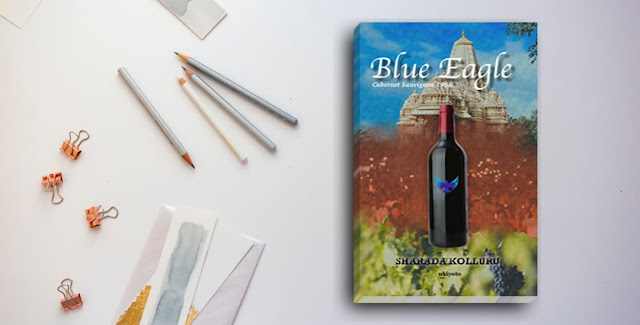 Neil hails from Italy, a sort of NRI. He is into wine business. Initially to understand his exact case, you will stumble upon his lifestyle, lineage, and profession. The author has given a lot of coverage of Italy – its landscape, culture, people and customs. When Neil lands up in India with a bottle of red wine named Blue Eagle of worth 3.75 crores, the trouble begins. The bottle gets stolen while catching a taxi. As he approaches the police station in Delhi, the story shuttles between India and Italy.

The second story is of Moe Somani. She hails from Yangon, Myanmar. She has lost her certificates while riding a cab. Both characters meet in the police station. The coverage on Myanmar is really fascinating and it shows the country’s current social and political fiasco. Moe is a chirpy girl of nineteen and she follows Aung San Suu Kyi.

Gradually, both characters get acquainted with each other and unpredictable love story sizzles between them. Neil’s character is intriguing, especially with that issue of cypridophobia. At one end, the investigation commences, on the other hand, the characters try to understand their lives and commitments. Neil is upset because of his mother’s affair with a young guy. Moe prefers freedom as one of the precious entities in her life. Her narration on Myanmar repeatedly highlights that freedom is a costly thing in that country. They also explore Delhi and its grim and beautiful sides.

But you must be thinking that why the red wine bottle cost 3.7 crores and what it was doing with Neil. If you get into the story, all things will fall in the pieces as what happened with them and why their commodities matter to them. Neil’s story nudges the plot ahead, for sure he is the protagonist, but, at the same time, Moe’s characterization is superb. She, in fact, shines with her family history.

The novel is powerful with its plot. Sharada’s narration is engaging yet lucid with a sense of coherence. It is a wonderful novel with its exquisite backdrop and intriguing cast of characters.