Arihant Dehumanized is the third book in the Android Robot Arihant Series. Among all three, this is the most terrific novel in terms of story and climaxes. The first part was back dropped against the state level Maharashtra, the second at national level, now this one is at international level. The novel opens up with Operation Ice Sweep which is about conflict of Siachen Glaciar and other posts between India and Pakistan. 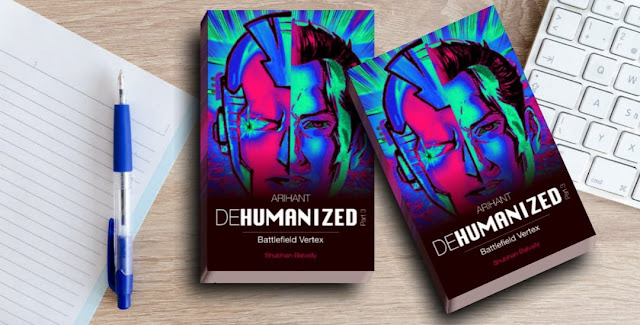 A terrific fight is going on at Siachen Glaciar, and much to the relief of the Indian soldiers, Arihant and a few more androids soldiers intervene and defeat the Pakistani soldiers brutally. Well, this did not go something likeable in the international media. Inclusion of androids in the army fight is considered a sort of transgression. In a nutshell, other countries did not like India’s rising military power with Iron Soldiers. As Pakistan puts pressure, the United World Forum orders India to humanize its Android Robot Army.

In this novel, the author initially discussed a lot of military history of two countries. He talked about treaty, situations, and what made Siachen Glaciar a strategic location for both the countries. The novel becomes unputdownable when Arihant is being humanized. As soon as Arihant is humanized, he finds himself in love with Anjali owning to some old memories. But with time things have changed and moved on. Arihant behaves and thinks like a human. He is flawed and becomes astray from his main aim. The way he longs to see and meet Anjali is riveting yet funny. Finding a humanized robot being in love is really worth captivating and that part of the novel reads like a ‘paradise’ experience.

Because of Anjali, there is drift between Suraj Singhania and Arihant. Why? Read on the story. Another thing about this novel is that the author cared to show that both sides are equal and rush ahead for a fierce battle. Not only this, Pakistan makes an army of robot soldiers named as Jihad. The fight at Bilafond La was pure adventure, full of swift twists and turns. There are many more characters in the novel that doesn’t forget to impress like Jorawar Singh, Abdul Quadeer, General Farrukh from Pakistan, Dhingra from the Indian Army.

At Bilafon La something valuable is at stake and Pakistan seemed to have a winning edge! Will Arihant come to rescue or will be busy in his love pursuit? Being a military fiction thriller, the expanse of the novel is vast and it reads like a sweeping saga. The novel has been written from many perspectives and all makes sense and puts an interesting show for readers. If you have read the Arihant series, probably this novel will now convert you into fan. The author Shubhan Balvally had put his best show in this novel. The kind of research he has done for Kashmir, Gilgit-Balistan, Indian and Pakistan army – all suggest that he is a some sort of veteran, not a commoner in the literature arena.

Right since the first page, the narration is superb. There is no hustle-bustle, the author introduced events and characters at the right time, making everything to fall in pieces inevitably.

While reading this classic novel, obviously many question will rise up such as will Anjali accept the love offer of Arihant? Will Arihant remain a human or fight for the country? Or will he revolt? What is the final fate of Pakistanis in Kashmir? And above all who was behind the making of Jihad like Iron Army for Pakistan?

With its measured pace and superb narration and 240 pages, the novel justifies its stance in the genre and in the Arihant series. In one word – a terrific novel with much Indianism at hand.