Book Review: The Lost Woman of Santacruz by Vijay Medtia

Vijay Medtia is a very promising crime thriller author from India. His previous novel ‘The Missing Husband’ was a masterpiece. Once again he didn’t fail to impress all his fans and readers with his new novel ‘The Lost Woman of Santacruz.’ This is the first book in the Police Inspector Ajay Shaktawat series. The novel is truly a page turner and terrific with its intensity and overall storyline. 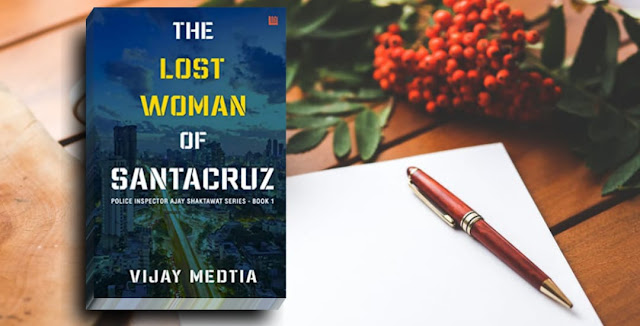 The novel opens up with a murder scene…one retired deputy chief of police Chandra is found murdered at his place with an injured man who later on succumbed to his injuries. Inspector Ajay Shaktawat gets the case. For long time, he remains clueless despite trying hard. Then like a brilliant piece of crime thriller, Ajay gets into the history of DCP Chandra. He gets a few leads like DCP Chandra was involved into a gold smuggling racket and having an affair with a woman.

As the title says, the novel holds key secrets through its female characters. It is Vijay’s way of writing that he involves women in his novels as they astray but also help in putting the puzzles in pieces. From that injured man the police get two Hindi words ‘da ka’. It could mean anything. But before things could get on the track, one more retired police officer is murdered. The way of killing is almost same. It means there is a serial killer out. The story is crime thriller but you will see the police inspector’s personal life going haywire because of bad terms with his wife and to add fat in the fire there is his dominant mother. The investigation keeps its momentum but you will find inspectors’ personal problems like banter in the backdrop. Overall, it all makes up the book quite spicy.

The storyline is long and cannot be predicted at all. Though from the title, it’s clear that a woman is involved but that is not sufficient to guess the subplots. Well, talking about that woman who goes in the hiding is important for the overall success of the case. So, Inspector Ajay Shaktawat gets help from some other cop and hunts the woman in Pune. From there, the novel changes its course. It was looking a case of greed but it turned out to be a matter of revenge. How? Two decades back something terrible happened… a young beautiful woman goes missing. But how all that is linked up with DCP Chandra?

The novel let readers interpret their results, but in the end it’s something totally unexpected. This is one classic crime thriller where readers will be seated on the edge and enjoying the game from a distance. The novel is great in its essence and stance. It is not every day that such novels are released…that too from Indian authors. Vijay’s description of Mumbai of 90s is a captivating thing in itself. He paints the lifestyle and local culture so well, it seems as he is the native of Mumbai. But he isn’t. Along with brilliant narrative, it’s his research of places and departments that finally delivers this novel in a near perfect way.

Grab your copy from Amazon.