Book Review: Israel is the Messiah by Daniel Paul K

Israel is the Messiah by Daniel Paul K is a thought-provoking book about Jews position in the world. The premise of the book is long and it shuttles between many timelines to support its scaffold and theories. The book may, initially, sound like a work of research. However, a close look reveals that it is rather a work of theology with many reinstated beliefs. This is one book I think people will have difficulty embracing, especially Christians and some Jewish mass. 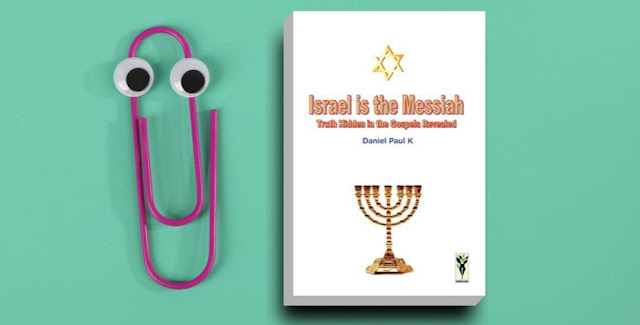 The author must have done research on various religious books so as to align the facts with them. Just the first look is enough that the book is about a religious proposition. As said above, the book is about Jews. The author has supported them – for that he dredged up many insights and facts from history.

Broadly, the book says that God always sent warning to Jews before destruction or curse fell upon them. The book has roots in the Messianic era. For those who are naïve with Judaism or ways of Jews, may find this book a little tough to comprehend. The book also challenges the view on Jesus Christ. The author asserts that he was not a Messiah for Jews unlike Moses who brought them freedom from Egyptians. When JC was born, or in that era, Jews were bound to Rome. As a startling fact, he didn’t set them free. He rather warns them of Sword. He spread the word that Jews will be scattered all over the world.

Likewise, there are many theories or insights that run rampant in the book. Out of 80 chapters, in most of them the author put the curse thing associated with Jews. While in some of the ending chapters, he talked about how Jews epitomize hope and resurrection. The chapter on Moses and three curses is quite captivating and resonates grimly what Hitler did to Jewish people. The book indeed brings out hidden truth in the Gospels. There are great instances and messages from scriptures. Let’s see some of them, so credibility begins building in your conscience.

“Jesus said he is not the messiah and no other individual will come as messiah. Moses also had said to the Jews, “At midday you will grope about like a blind man in the dark. You will be unsuccessful in everything you do; day after day you will be oppressed and robbed, with no one to rescue you.”

The book challenges the prophecies of JC and other prophets. It talks about one god that can place all in heaven. It is the same god who brought blessing, curse, and blessing after curse. This god revives and resurrects Jews and gives them their promised land: Jerusalem. Well, that god is Yahovah. The last chapter of the book well disposes the value and position of this god.

By all means, this is not a simple book. It is outrageous and audacious. People have mixed thoughts and feelings for Jews community. This book could turn at any side, fingers crossed. In the end, someone confused about Judaism or never thought about understanding Jews, can definitely pick up this book. It will clear the fog to some extent.