The Greatest Game by Greg Rajaram is a different-level novel with multi characters and point of views. The novel starts something as primitive historical, later on treads the path of philosophy. The book is divided into two parts. Undoubtedly, the first part is riveting and promises a great story. However, a close look reveals that it tries transporting readers to that time of Adam and Eve or more specifically to the roots of human race. There we have Devi and Shivaji. Devi is fascinated by the tree where a silver apple hangs. It tempts her. She can have all the knowledge and walk around the earth. Shivaji knows the trick. He warns her to stay away but as it was done in the human race history, Devi gets the silver apple. 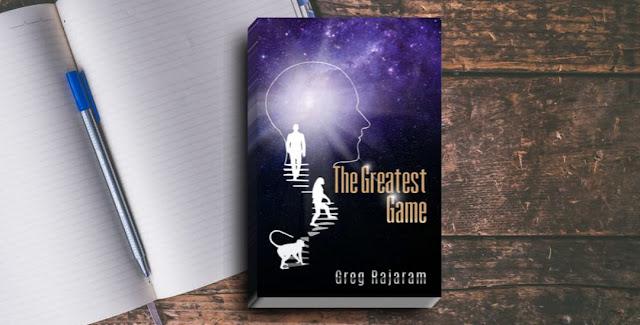 Subsequently, the ‘price game’ starts. For everything, humans need to pay the price, be it knowledge or intelligence. Later on, their sons divide and go on forming the kingdoms. The story in the part one forms the roots of the book. It ascends a lineage of human behavior. Above all, the author insists that it is love that can eliminate all problems of humans.

In the next part, we see philosophical discussion of a young boy Adi with two persons. They discuss and debate on a gamut of topics. Likewise, there are a few more stories that define the essence of love in our lives, in shaping the roots of this world.

This is a way unique novel that focuses more on its ideology than the stories inside. Initially, readers will reckon it as something mythological fiction but it differs in its stance once the story of Devi and Shivaji and Surya tribe and Mathra fades away.

The book is easy to read but difficult to grasp. The level of maturity it sheds is something that needs careful attention of readers. The second part of the book chugs ahead slowly as compared to the first part. Despite an incoherent storyline, the novel manages to grip its readers because Greg writes well and the philosophy makes sense. On a con side, the book is not for everyone, but people out searching the meaning of life, love, existence, and difference between good and evil will surely find answers in it. Some books cannot be concluded in one review, it is one such book.