“Better to Die than a Coward” was a popular saying among the Gorkha soldiers who served the British for over 200 years. First they were with the East India Company, then with the British Army, and now with the Indian Army. The term Gorkha emanates from Nepal. However, as much as Nepalese, they are also a vital part of India for more than many centuries. Courageous, good fighters, soldiers, honesty and integrity are some of the virtues that epitomize Gorkha. 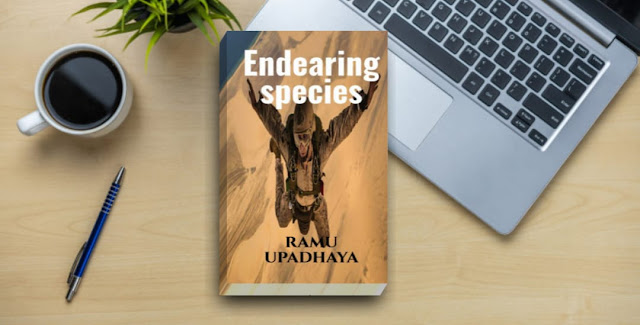 There have been many books on the life of Gorkha soldiers, but hardly any good book to understand their stance in India. Well, the book Endearing Species by Ramu Upadhaya is a highly relevant book on understanding the position and culture and social chores of Gorkhas living in the North Eastern part of India. The book is set amidst the sublime backdrop of Assam, where much population of Gorkha has settled gradually over a period of time. This book explores their settlement i.e. mainly after the independence. Running up to 260 pages, and divided into 20 chapters, this is a classic book which blends fiction into facts to deliver impeccable account of their lives. The book carries authentic voice of Gorkha people through the characters like Thula and Maila.

The narrative is concurrent with more than two aspects swirling together, without overlapping. On a fictional side, the story starts with Thula. He works with his boss, a Bengali, in the railways. Impressed by honesty and integrity of Thula, his boss appoints him in the Indian railways, though Thula was not academically qualified for the job. Thula carries his work with full honesty and dedication, which causes jealousy to others. As the book chugs ahead, Thula is replaced by his son Maila. Maila is also honest and good but there are generational gaps and thus it creates a difference between two Gorkhas.

Much of the story is nudged ahead with Maila as a character in the backdrop. The author tries to portray the life cycle of Gorkha population that settled in the hills of Assam. He familiarizes readers with the early settlement to current-day political scenario of the Gorkha people as how they matter and influence in the region.

The book is tremendously rich with the cultural knowledge about the Gorkha people of India. Since the term Gorkha emanated from Nepal, there are differences between types of Gorkha. The author has thrown light with optimum credibility as what makes Indian Gorkha different from others. Talking about culture, it is not about Gorkha and others, the author put a distinguishing light on Hilly vs Plain culture and heritage. This is more evident when Gorkha had to make a choice whether to live in the hills or plains. The book is like A to Z about a Gorkha man named Maila, from childhood to adolescent to later age. It is neither a biography nor a fictional tale. It is more of a cultural study. The language of the book is coherent and at times redundant; however, it serves well to its readers. Ramu Upadhaya provides a rich taste of Gorkha culture while discussing many aspects such as people of Assam, outsiders vs. insiders, Dima Hasao district, India’s relationships with Nepal, regional tribes and much more. In this brilliant narrative, the human side of Gorkha is revealed with sheer profundity.