Cycle of Clichés by Niladri Chakraborty is quite a riveting and impressive novel. It begins as slow burn novel but midway outpaces everything and at one point of time it becomes totally unputdownable. The book runs over 390 pages, its stretch and expanse is sweeping and gripping. Initially, readers will not have the exact ideas where the story is heading on. Some might feel it is eulogizing Assam – the state of the narrator. However, once readers get acquainted with 30 or 40 pages, they feel the heat of the undercurrent themes that this novel brings forward. 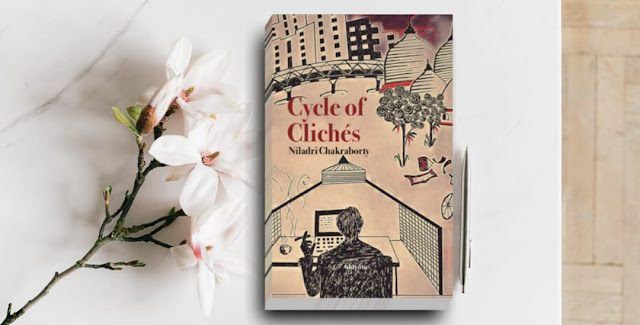 It is a story that is told from one person’s point of view. He is the narrator cum lead character, Neelim. Initially, the story is about his carefree lucky days in Tezpur, Assam. The time is 1990s, he was enjoying his childhood days like anything with his parents, friend Biswa, and elder brother Nisim. Many would find Neelim someone as envious yet innocent. He is good at cricket and often puts himself into Bollywood movies type situations. In short, he is enjoying the rich cultural taste of 90s. He is so envious or say ambitious that he doesn’t rationale between far distant dreams and his instant caliber. He dreams of playing with Sachin Tendulkar. His friend Biswa wants to be a film maker. His brother Nisim has something else in his mind which is difficult to understand. After one stroke of mood swings, he begins dreaming of a career and fame of Salman Rushdie. Neelim has many stories in his bundle and one of them can bag him Booker prize and millions of money.

The story might be of an innocent dabbler, but the novel never leaves its undercurrent theme of insider and outsider, it runs deep like banter in the backdrop. By reading this novel, one can successfully decipher that Assam is a different state in India and why it has conflicts. The author hardly left any event ignored that ignites the cultural gem of the state, special highlight is Bihu.

The novel at first covers the lifestyle of a teenager growing in Tezpur. But later on the author begins picking up state insurgencies that affect and disturb intellectual people and their family like of Neelim. At one side, Nisim is busy with his misdemeanors and adventures and friends, on the other side, we see the effect of state insurgencies on his family. His father had returned from the UK and Kolkata to serve his state Assam in full capacity as a teacher. They call him Deuta. He was married to a Bengali woman. Probably, people of Assam don’t recognize outsiders and their contributions to the state. Neelim was half outsider because his mother was Bengali. Whatever services and duties they were carrying out towards making Assam a great state goes in vain when Deuta is killed by insurgents. The reason was flag hoisting at republic day. That killing laid the foundation of family ruin. Be it Neelim or others in his family, they all now get the share of their struggle. They moved to Guwahati but to no avail. Politics is everywhere, reading this novel can make one aware why the people of Assam wanted NRC so badly.

The novel is culturally, socially, and economically balanced. All these aspects of the lead characters are portrayed brilliantly. Narratives of Deuta and Nisim are done beautifully but it was not needed as the story is more about Neelim and his peculiar situations. How a family breaks and how can the state disorder rob the peace of a family is captured poignantly. The novel is not all about one boy’s story, it is more, probably cannot be discussed in one review. It needs to be read in peace and leisure. It is a rich novel with many unique perspectives under its nose. Niladri Chakraborty has done a great job with his debut novel. He managed to bring a lot of memories of old days for the people of Assam and those who lived and blossomed the growing years in 1990s. At times the story sounds repetitive, but it manages to capture the impulse of the time. The novel revives the lost time of many who lived like Neelim. A heart pounding book for its genre.

Writer’s stance on showcasing the culture of Assam is unforgettable, whether it is Zubeenda songs or Neelim’s own wild imagination. Such novels are hard to find, truly a gem.