Scents and Shadows by Dr. Ranjana Sharan Sinha is an impressive collection of poems that explore the thematic frame of life and emotions and nature in a poetic way. The book offers 70 poems that can be read in one sitting as they are so charming and soul-stirring. 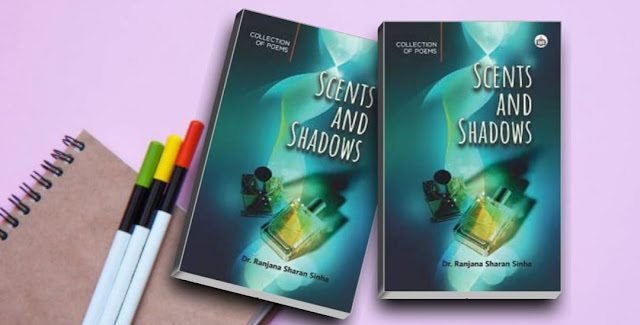 The collection is eminent in capturing a gamut of issues and topics about your lives’ humdrum existence, moments in cogitation, bittersweet memories, distinct aspirations, sublime nature and so on. The collection opens up with Once Again – a 6 stanza poem – where the poet is clearly lost in the glory of old days, whether it is about love or aspirations or the surrounding nature – she holds pain in her eyes to see the changes that happened and it ossified her ageing. It is an amazing poem that tells a lot about ever-changing life.

The collection doesn’t stop at any particular theme. It has a wide vista and tries to encompass a lot within it. There are poems on feminism, gender discrimination; maids working in posh society – in some of the poems the poet brilliantly covered the issues by brining the nature and beauty of flowers. Nature is a consistent theme in the collection, for instance the poem ‘Earthquake’ and ‘Man and Tree’ poems bring out the brutality of the commerce world, as how is something captured and destroyed and then turned into a piece of merchandize to benefit a few. Probably, the poet tried conveying that we humans have been exploiting the mother earth for more than that we need. It’s time to stop all on the name of business.

A shadow of father personality and his allied influence run in the poem ‘May Returns without You’. This poem is poignant in bringing forward the hidden pain and grief we carry for our loved ones that we lose in life. Seasons and days are not the same once someone passes away. One feels the hollowness in the garb of old memories. The poem Mahua brilliantly captures the pain and plight of tribal women that puts their life at stake for the sake of daily chores.

Whether the poems are about relationship, childhood, women crises, or any random subject – a kind of tenderness is evident throughout. The poet has kept its approach soft. Also some of the poems delve deep into some strange sort of abyss. Yes, in many poems the themes run dark, but the screaming is loud enough to capture one’s mind and looks like requesting not to indulge into anything insane for the sake of peace and humanity.

It would be unfair to conclude the review without a glimpse of the poet’s brilliance, well, in the poem Achromatic Autumn, the following lines may nudge you for an ovation.

some leaves burn with shades of russet and red.

the fiery cloak of colours

and takes a dip in the river."

The book is short and one can read it really fast i.e. two readings can be done in, like, a couple of hours. However, to get into the skin of their meaning requires a serious thought process and time where you feel like being paused. As someone said quite aptly that best of our moments from memories are brought alive when we are in the pause mood – it gives the ability to cogitate, rethink, and an urge pulsates to put the things right.

This is a poetry collection where picking out the best not only creates a dilemma but also pushes your limit for literary aesthetics. This is one such book. By involving various themes, the poet made sure that you, as a reader, ought to go for some if not all. 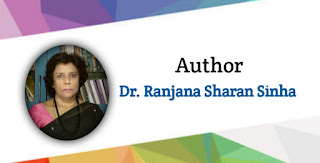 Poet-author-professor of English, Dr. Ranjana Sharan Sinha is a well- known voice of Indian Poetry in English with international recognition. Her poems have been included in the postgraduate syllabus of (English), Purnea University, Purnia. Honoured with a number of awards for her contribution to literature, she has received a commendation from the former President of India, A.P.J. Abdul Kalam for her poem 'Mother Nature' contained in her collection of poems 'Spring Zone'.

Her poems have been published in global anthologies of Inner Child Press, U.S.A, Atunis Galaktika, Sufi International, etc., and has been a part of the Poetry Project like Kali Project of Indie Blu(e) publishes, U.S.A. She is a research supervisor (English), RTM Nagpur University, Nagpur and is associated with many national and international literary organisations and poetry groups. One of the members of the Editorial Board, Our Poetry Archive (OPA). She lives in Nagpur, Maharashtra, India.