Arihant by Shubhan Balvally is a riveting crime thriller with a healthy dose of science fiction in it. The novel offers high level of drama beyond its conventional genre. At the façade of the story we see the father of modern technology, Professor Ramanna. He is one of the main and silent characters of the novel, remains in the backdrop like banter. He invented software called Antitox that detected accurate levels of contamination in food. As a scientist he is famous and rich and about to reveal his next ground-breaking invention. But things are not good as there are some people, a group of five, who want to snatch his next invention. After one event, the goons chase him so badly that Professor Ramanna is left with no option but to kill himself. Professor Ramanna realized the villains behind him, so he gets blows himself in his lab. 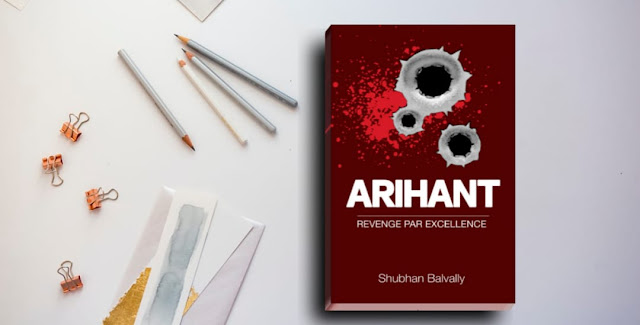 Who are the goons? Of course profit making businessman. The world believes that Professor Ramanna’s new invention died with him. Well that’s the climax in the book. All of sudden, a powerful figure begins killing the enemies of Professor Ramanna. The initial blame falls on one guard but as ACP Anand Rane gets into the case things get clear and soon it comes out the figure out for killing is an android robot with mesmerizing intelligence and combat skills. The police try harder to capture him but he is way superior to all. The name of the robot is Arihant – probably it was Professor Ramanna’s invention that people were expecting. And a robot is out for revenge?

One side of the story is about Arihant’s robotic charm and on the other side he develops some feelings like human beings. What are they feelings? Can he love someone? Well, to test his love feelings, the author introduces a college girl named Anjali who fell for him. But how and why? Will she play any significant role in shaping his destiny? Better to discover when you pick up the book.

To many the novel Arihant may remind them of some sci-fi movies based on robotic life, but it’s pure in its essence and doesn’t endorse any copied idea. Here the theme of the revenge is evident throughout the actions of the robot. The novel is clean and moves at a fast pace, one can read the book in one sitting. Layer by layer, the author unveils the powers of the robot. What could have happened if this robot was used by police or army to hound enemies? It is a highly packed action thriller yet light to read. Author Shubhan Balvally chosen a captivating storyline with lucid writing skills. It can be read by naïve to compulsive readers alike. People who love books based on robotic mechanism will definitely enjoy this piece of literature.