The Venus World by Hywel Richard Pinto is a part fantasy thriller and part dystopian set in future i.e. 2100. It is a fast-paced novel with around 200 pages, the author’s simple and lucid narration makes the book easy to read and understand and follow the characters (though it has a long cast of characters). This is a kind of novel with no particular protagonist but there are too many antagonists. In fact, the conflicting situation runs like banter in the backdrop. 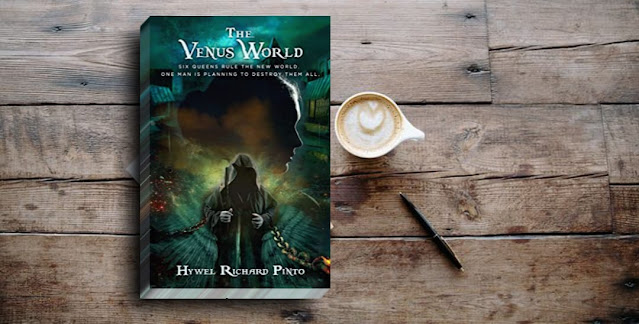 Talking about the story, it has been depicted that in 2025 some catastrophic incident wiped the population of men. Post that the earth is being ruled by women only. Men are rare and they are used as sex toys or slaves or at times for reproduction. The world without men is itself contrasting to sound but the premise of the book is way engaging than one could think of. The whole world is divided into 6 regions. One queen rules over many countries but they are still identified by one country. For instance, the queen Rani rules in India, but under her regions fall many nations like India, Sri Lanka, Veitnam, Malaysia, Indonesia, and Nepal and so on. Since this is a fantasy cum dystopian novel, thus a different setting of the world was expected. The author created the world on his sheer imagination with nothing as fake, everything sounds surreal and believable.

According to the Zagreb Convention (a sort of treaty), no queen is allowed to work on the specimen of male that can increase their population. However, conflicting of nature is inevitable. Another thing is that there is a streak of greed in some queens that want to rule all over the world by trampling others. Well, so the novel is not a straight story, it has its own share of twists and turns, unpredictability, there are conspiracies, underground movements, hidden labs, and transgression of rules, and so on.

As the story chugs ahead, it becomes clear that there is a hidden fraternity of men that wants to overtake the world now. It is being headed by Z – a man feared most by all. But there are other angles also in the story that makes it completely unputdownable after some time. The story steers ahead for a heady mix of conflict, war, hope, conspiracies and much more. There are many characters in the story who act from time and again to nudge the plot, such as Johar – the sex slave of Rani, Ned – the boy who is the bone of contention, Mema – daughter of Aneri Queen, and many more slaves.

Hywel Richard Pinto has carefully woven the plot with no overlapping. However, at times the novel goes off the track and sounds a bit shallow. But the narration is captivating and writing style so lucid that it overlooks the pitfall and makes the book highly readable. This is a novel with unique idea, probably in the times to come it can be made into some TV thriller or web series. The good thing is that the author has kept the length optimum – which is a huge plus point for a dystopian novel. For hardcore readers that love mix of fantasy and dystopia will definitely savour this novel.