Shalom Namaste by Nurani S. Ravi is an interesting novel that takes stance on social and economic offenders of India that have fled the country to avoid persecution. The novel is slightly a political thriller with some other auxiliary themes such as adventure, espionage, drama, nationalism, etc. 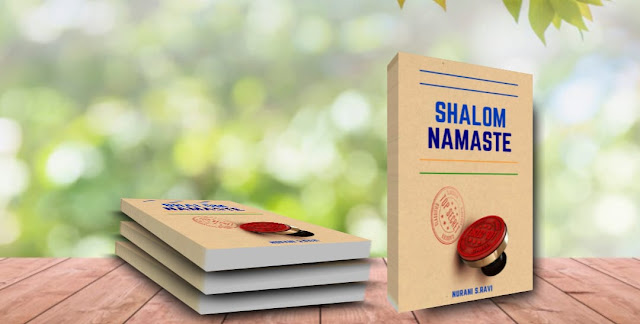 It is a novel that has, in particular, no fixed lead character. It is rather based on circumstances. To understand the novel, the readers should be aware of political situation of India and its stance on fugitives who left the country by taking huge loans from banks. However, the novel is not all about bad bank loans, it also deals with some other offenders as well.

PMO, NSA, CIS, CSS – all prepare a list of 50 offenders – who have dented the reputation of the country by some or other way. They need to be traced and if possible wanted back in India. But that’s not possible. Thus, higher officials pick up 5 people who have some serious charges against them such as fraudulent activities with gold and diamond market, banks, involvement in terrorism and murder. The novel first introduces all major five stories that in the later part will be rounded up. So, from one angle, the story becomes clear with its objectives.

For each story, there is some file name. For instance, Housing scam related to some real-estate business people, they fled the country with huge bad loans, because after demonetization their business failed miserably. Then there is Gold Fever – they run away to UAE after bamboozling bank lockers filled with gold. Likewise there is a story of Ibrahim, he was involved in terrorism.  Then there is Nirmal Zaveri – the diamond tycoon. All the cases may remind some or other figures from India. Rest of the novel is about getting them back.

PMO with the help of NSA Vasu and CSS Menon begins the operation Shalom Namaste. They secretly join hands with Mossad of Israel. The story chugs ahead comfortably with sweeps and back stories from India and Israel. Despite a long cast of characters, there is clarity of thoughts and action in the book. It doesn’t confuse people. The book is written in the interest of nation.

It is entertaining yet dramatic to note their planning and execution. The team works like professional detectives. To some extent, the novel drives the suspense element but after some time it loses its sheen because trapping all fugitives at one time looked similar. However, despite some pitfalls, the novel does justice to its genre. Why the operation is coded as Shalom Namaste? What does this jargon indicate? Will there be bloodshed or the plan will be spoilt to capture these people? Inquisitive for all answers – you must pick up this novel.

Stretching up to 187 pages, it is a light read with some amazing story inside. This time, N. S. Ravi’s narration is not only captivating but lucid as well. Many might not believe that such a serious novel is penned down so seamlessly. A highly recommended novel on fugitives, nationalism, politics and much more.