Raptor Rising by Anjali Joshi is a slightly dark psychological crime thriller, published by Rupa Publication. Mostly set against the Indian backdrop, this 215 pages novel offers a different read for crime genre readers. Regular readers will have a gala-gala time with this novel, while naïve ones may need time to get totally under its skin. Probably, the author recognized its intriguing storyline, thus narrated the story in short chapters. This makes the reading quite easy and focused. 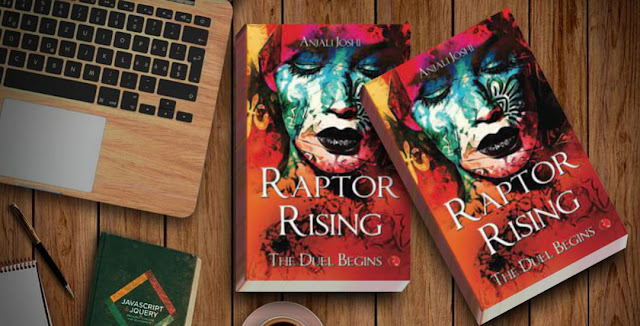 The story opens in Lakshadweep Island where a crew is shooting for the superstar Zameer Khan. The story lingers there for some time but moves on when the actor goes missing. Suspense begins filling the story since beginning, especially through that stunt woman Rumana. Soon a video goes viral showing Zameer Khan being killed by a shadowy killer. It becomes evident right at the beginning that the killer is some lady.

After Zameer, a few more murders take place in somewhat identical way. It is a work of a serial killer. The killer records the murder and then uploads it to dark web (a sort of Internet where tracing is impossible). Vikram – the lead cop – and his team starts investigation. They zeroed on some women.

Coverage on crime events is lesser as compared to investigation. Vikram and his team are powerful but they are led astray by the alpha woman, who is also a hidden protagonist in the book. Like the killer, Vikram too is a sort of a lead character with some dark sweeps. As the story chugs ahead, readers will find comfort in chasing the killer. It is a not a straight murder mystery novel. Here the author takes plunge into many aspects, and one of the prominent one is the alpha nature of Nicole. She becomes the prime suspect but there has to be some proofs to trap her.

As Vikram grows restless after losing her sister, he is desperate to find out the killer. He delves deep into the game of dark web and also finds out that the killer is associated with some ancient Japanese combat skill.

Both the characters Nicole and Vikram break the conventional rules of being protagonists and they mutually involve in a sort of duel – only death may declare the winner – they are perfect antagonists to each other as well. Readers will have difficult time picking up their hero from this fast-paced startling thriller novel.

Anjali’s narration is beautiful and descriptive. Though the story doesn’t come to readers easily, yet one feels bonding with the novel, because the author keeps the tempo of the novel engaging and readers spellbound with her alpha female character.