The Mirror by Neerav Harsh is a general fictional novel with deep psychological layers. The story features a man who one odd day begins seeing his image in the mirror at his home. The image in the mirror is a sort of his doppelganger. The man in the mirror looks 10 years elder to him. At first, the nameless protagonist is shocked to such an illusionary figure but with time he accepts the bitter reality. 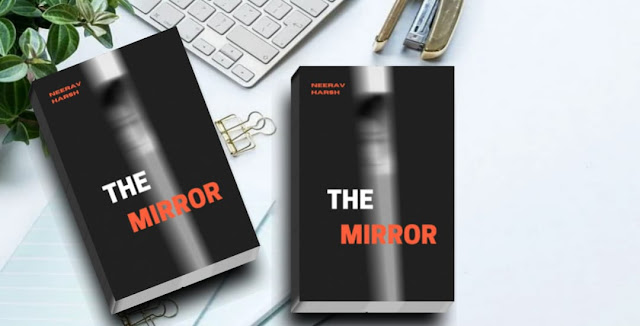 Readers may get confused here onwards; they may take time to settle with such unique concept of double existence. But surprisingly, the man is visible only to the protagonist, not to his son or wife Lina or his mother.

To decipher the real reason behind the mirror image, one need to get into the undercurrent theme of the novel that deals with false pretenses and some past guilt that disturb a man all his life. On similar lines, with incoherent narration, is built the scaffold of this novel. The novel is plotless but it’s so intriguing in its own layers that one finds that at one point of time there is some engaging message needs to be relayed to the masses. As a reader, one might keep thinking who’s that person in the image and why he is troubling that simple yet decent nameless protagonist. Probably, the following except try to resonate with many readers line of thinking:

“It’s because of you that I am here, and I believe that you need help from me. Maybe something has been bothering you,” he said.

Then, he went on to add, “let’s start with Artha…you really don’t remember anything you do?!”

Mentioning of Artha – someone from his school – resurfaces waves of guilt and contribution. But even then, protagonist did not open up. Artha itself is a little mystery in the novel. But who’s that person in the mirror. May be this excerpt try to clear some air off it:

“I am visible only to you, but I am not you. You can’t shush me as you need. I will be here reminding you who you are.”

There are a lot of behavioral insights as the story chugs ahead. Though the novel is short but changes in characters thinking for themselves and others with respect to changing time are evident and it indicates that human relationships are as fragile as thoughts. The man who is later confined to his room is labeled as something Demented – not fit for society. He suffers a lot in the confinement, trying to get out from the clutches of that mirror image...but was it possible? Was there any light at the end of the tunnel?

The novel is not easy to read and keep track of events. However, it holds significance in today’s time as people are running after hollow hedonistic things, without much realization of the rat race. The story sheds light on pure cogitation, retrospection, and the work of a subconscious mind that keeps alive guilt of a man. The author has used very close yet tight narration, for light readers it will be a tough book, may be requiring couple of reads to totally get into the skin of the novel.