Hiraeth by Ritika Kanodia is a fictional novel featuring a 24-year-old young girl named Raya. The novel is poignant in exploring the nostalgic side of people who run away from home to a different land owing to some reasons. 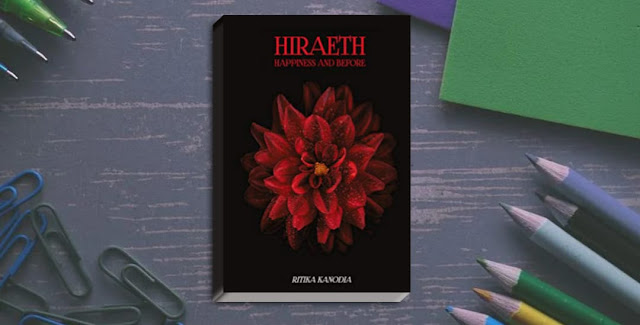 In this novel, Raya moves out to Australia as an MBA student. However, much to her shock, she finds herself in an emotional turmoil on a foreign land. As expected, there comes a bundle of problems like difficulty in connecting with locals, aloofness, loneliness, lack of true friends, and most importantly she has to do all her chores by herself without the logistic or moral support of her parents.

Raya basically moves out of home, as back in India there were some people forcing her for marriage and wants to keep her tied under their nose. She rebelled. She with the help of someone close from her family runs away to Australia on a substantial and plausible reason of higher studies. It is evident that the lead character is aloof and facing the challenges of loneliness. As the novel moves, there are a lot of incoherent feelings that she go through. But things come out of fog as and when the story reaches midway.

The novel is more about thoughts and deeds and shuttles between past and present experience. She longs to go back home at one moment, and the other she wants to be hidden in her nest away from all. She is passing through emotional crises. In Australia, she finds some good friends and infatuated by somebody in later chapters. But still something keeps haunting her. It could be possible that she was missing her home and family members...but there is more than anyone could think of. The cultural shock and backdrop of a different continent runs like a banter in the backdrop.

The novel holds higher value for people struggle to keep pace with themselves owing to social pressure and emotional conflict. This novel presents Raya as one prominent figure with some deep psychological layers. Her characterization is neither larger-than-life nor simple – she is brave yet intriguing.

Ritika has captivating narration but with slightly incoherent writing style. The novel is easy to understand and follow, provided one manages to read some initial chapters. Overall, it is a worth time and money novel about a brave Indian girl. Kudos to the author for bringing a novel presenting the other side of a young woman longing to live abroad! Was her decision right? Was she on the good path by moving to Australia all alone? Curious…? You must pick up the novel to delve deep into it.

Grab your copy from Amazon.